Novel (and movie) about supernatural being choosing successor

I'm trying to remember the title of a book I read back in the late 1970's (I think, maybe the early 80's). The central character was a young-ish woman who had received an invitation to spend time at the mansion of someone she didn't (or barely) knew. She and her husband went and met a handful of other people who were also visiting. My recollection is that people died (or were killed) one by one. At the end, the host told the woman that she was the chosen one to take over his supernatural powers. Included in this would be a very long life. She would choose "apprentices" (my word, I don't remember what the book said) from whom she would choose her successor when the time came, just as she had just gone through. She then chose her husband as her first apprentice.

Within a year or two of reading the book, a movie was made that was fairly true to the book.

It sounds like you're looking for The Legacy, the 1978 film actually was first and had the novel, written by John Coyne, after. The film stared Katherine Ross as an interior decorator; Maggie Walsh, who is invited to England for a job. Her and her boyfriend get into a car accident and are invited to the estate of Jason Mountolive; Ravenhurst. There they meet his five beneficiaries, because Jason is dying. Maggie receives a crested ring from him. One by one, the others meet horrible accidents. Maggie finds out that the Mountolive family had a history of being into witchcraft, and that she is Jason's great-granddaughter. She will inherit his powers. She selects her boyfriend as her first beneficiary. 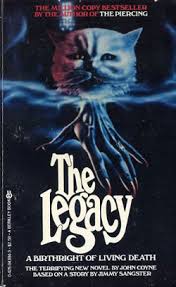 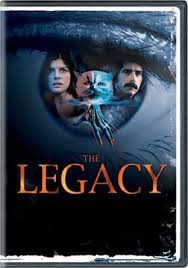 7
What sci-fi novel has a technology called "Plaax" and a character named "Gifon"?
12
SF novel about no babies being born
15
Novel about reincarnated lovers across history
7
Book name for Epic novel about colonizing a large planet
7
Series about a young woman who can sense supernatural beings and works in auto repair
11
Looking for a novel about a mysterious sphere/cube shaped object
10
Novel about a red killer and a woman whose drawings come to life
14
80's movie involving supernatural beings, possibly witchcraft