What was the original description and backstory for the character of Data?

I've seen a video about the original wardrobe and makeup for Brent Spiner in the character of Data. One of the pictures I have found is this: 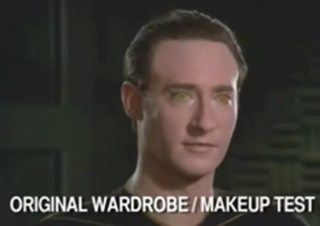 You will note how, well, human Data looks in this picture - none of the white/grey make-up that was actually used in the series.

My question is what were the original plans for the character of Data? I'm looking for sources which provide details about Data's character and origins before the show aired if there were any differences between what the final character had as his background compared to what was originally thought.

[He] is an android so perfectly fabricated that only a skilled biologist would know he is not composed of normal flesh and blood.

Perhaps explaining his appearance in the picture above.

At the time of writing (23 March 1987), the 'Bible' indicated that the role of Data had yet to be cast. However, Dr Noonien Soong was not planned to be the original creator of Data! Instead, he was

manufactured by highly advanced (and never seen) aliens who intended him to serve as a repository of all the memories of a doomed Earth-Asian space colony.

Which fits in well with Dr Soong's Asian heritage and living on Omicron Theta for a time.

His abilities as an android, namely his computational abilities, appear to be the same as the final character; he is described as a "walking library". Although as Xantec points out in the below comment, his unfamiliarity with certain information (e.g. the phrase 'snoop' in Encounter at Farpoint) suggest his knowledge was a bit more limited. Now, this is pure conjecture, but possibly because if Data knew everything that was known by the Federation, it probably wouldn't help move the plot along.

The TNG Bible also describes how Data was found alone on the planet by Starfleet who were searching for the colonists etc. with a very similar story as we hear in the final version.

Data's lack of emotions aren't described in much detail though, although his enthusiasm to learn what it is like to become a human (note: not quite the same as to actually become a human or as close to it as he can) is similar.

46
Who invented Star Trek sideburns and why?

6
Was the relationship between Pulaski and Data supposed to parallel that of Spock and McCoy?
12
What did Data throw in the fire?
2
Was Data safe from the Crystalline Entity?
9
What was Data reciting?
5
What was this character thinking in “Brothers”?
24
How was the pronunciation of Data decided?
1
What causes Worf and Data to act strangely?
24
How did Data not know what Aldebaran Whiskey was?
3
Did Brent Spiner ad-lib this line from “Shades of Gray”?
14
What's the source for this claim that Data ages?