This will probably be a long shot, but I read a novel about twenty years ago that I'm sure is from the late sixties.

I can only really remember the main plot point: There's a man in it who can change reality at will with only his mind. A medical doctor studies him and uses this to his own ends. Two more things: there was an alien invasion and people were preoccupied with a volcano at some point.

Don't remember any character names or locations. Sorry about that. If I knew those, I'd probably be able to find this myself. My son and his wife are really getting into sci-fi books and stories and I'd like to be able to recommend this one to them, since I remember enjoying it at the time. 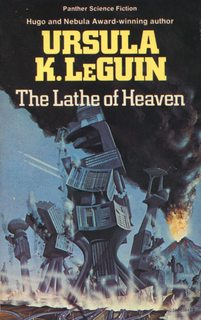 The main character, George Orr, suffers from "effective dreaming", which means that his dreams can alter reality. With training, he can use it to achieve desired changes.

He initially receives treatment from a psychiatrist in order to suppress the dreaming, but the psychiatrist realizes the potential here, and subsequently uses George and his power to alter the world to create a utopia.

An alien invasion, however, is created in the process — first of the moon, then of Earth itself. Also, Mount Hood outside Portland, Oregon becomes an active volcano.

You mentioned that you are sure that the novel is from the 1960s, but too many of the plot points match up for it to not be The Lathe of Heaven.

By the way, it was made into a television film twice — in case you and your son and his wife are interested.

6
Scifi anthology series episode, movie, and book about a man whose dreams change the world

22
Man sells his soul in exchange for gold, can't bathe for years
8
Looking for a novel I read 25-30 years ago about a man drifting in the Bermuda Triangle
7
I'm looking for a sci-fi novel I read in junior high back in the mid-80s about suspended animation
7
Science fiction anthology with story about a man who kidnaps his daughter's boyfriend
7
Looking for dystopian sci fi/horror web story set during a war (religious, possibly), where one side has giant flying alien 'angels' helping them
19
Looking for a sci-fi movie about people who have to play a game to obtain a life-prolonging drug
11
Looking for a specific novel about aliens and toilet paper time travel
13
Identify a fantasy novel about a boy who gains powers from his MUD character