Why is Azula's fire blue?

Azula's fire is blue unlike other powerful firebenders who have orange fire. For instance, her uncle Iroh or Fire Lord Sozin, even while under the influence of Sozin's Comet, have orange fire.

From Wikipedia article about Azula :

One unique feature of Azula's firebending is that she creates blue flames, setting her apart from all other firebenders.

But why is her fire blue? 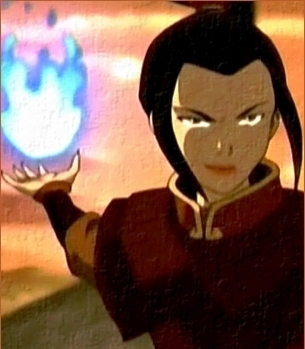 The blue part of a flame is widely believed to be the hottest part of the flame.

The regions are also separated by color, the blue region (the innermost part of the flame) being the hottest.

In reality, there are many factors that go into a flame's color, but the color of Azula's firebending is meant to show that it is hotter than the average firebender.

Azula's fire was made blue to denote both her mastery in both firebending and lightning-creation. Azula's fire burns hotter than most due to her lightning-mastery, but will turn orange as it cools. Second in raw power only to the Fire Lord Ozai, she was a force to be reckoned with.

The show's creators wanted her to stand out from other firebenders during the series as the primary antagonist of the second season.

From the Avatar Wiki:

Azula's characteristic blue flames symbolize the power she possessed and constantly sought to increase. Her apathy also accounted for her ability to create and direct lightning, the "cold-blooded fire". According to Iroh, the skill required complete control of all emotion, which would not prove difficult for Azula with her one-track mentality.

A child prodigy, Azula was capable of feats of firebending no other benders could easily perform. Since she could always summon lightning, that may be the critical difference in how her fire appeared in comparison to other firebenders. Bending is a chi-related discipline, and part of the display is a relationship to the psychological state of the bender. Volatile and quick to anger, she was very much like the lightning she was prone to use.

Azula was able to create lightning easily and at any time she wanted. Only two other firebenders were shown to be capable of such a feat and even Aang, the Avatar was never shown to be able to perform lightning-casting. She was able to use her powers for an extended period of time, create disks and sheets of flame and could even use shields made of flame capable of resisting the combined attacks of Aang, Zuko, Katara, and Toph simultaneously.

A ruthless perfectionist, cold-hearted and lacking empathy others, fearing to appear weak, she studied harder than any other firebenders her age. She was always considered mentally unstable, a psychological condition that would only grow more aggravated with time. Despite her mental instability, she was a highly skilled fighter, tactician and strategist and conquered the wall city of Ba Sing Se, thought to be impregnable. She was capable of a number of other feats no other benders could easily perform:

Azula is able to propel herself, using her flames, in a manner similar to a rocket. This ability has also been extended as a means to fly for short periods of time as seen in the Boiling Rock. She is also a skilled unarmed fighter; in "The Avatar State", she bested Zuko without firebending, and in "The Day of Black Sun", avoided the combined forces of Aang, Toph, and Sokka for several minutes without her bending to aid her. In "Appa's Lost Days", when Suki made a stab attack at Azula with her fan, Azula jumped horizontally and knocked Suki's fan out of her hand and onto a tree.

She also has the ability to lie without altering her heart rate and breathing patterns, making it near impossible to detect if she's lying, as demonstrated in the Episode "The Day of Black Sun", when she says, "I am a 400 foot-tall purple platypus-bear with pink horns and silver wings." She is also an accomplished strategist, as she was able to conquer Ba Sing Se, a city thought to be impenetrable, while usurping the Earth King and hierarchy of the Earth Kingdom capital all in one swift move.

Azula is an expert in persuasion. She is capable of using psychological warfare, intimidation, and mistruths to con other people into obeying her.

Concerning Azula's fire, she had a high-level of firebending mastery but not the emotional prowess to control it or herself. As was shown to Zuko and Aang by the surviving dragons, flame comes in a multitude of colors blue being just one. I believe the correlation of her blue flame was due to the power of her personality 'burning so hot' that it and she had little regard for anything else. This became all too evident after her defeat at the hands of both Zuko and Katara during the battle of Zohzin's Comet. As the dragons demonstrated, though fire is a destructive force it is also beneficial. Its power and beauty must be respected and handled as such. At no time did Azula demonstrate that capacity. For her, mastery of firebending meant pure domination. That unfortunate attitude lead to her undoing.

I was sorry after seeing what was capable with fire the writers didn't allow Zuko to master his own color of flame. He had come a long way emotionally and I believe he would have been able to strike a balance between himself and his power his sister never could have achieved.

I am no expert but this how it goes according to me. azula is a very powerful bender and is only second to ozai and iroh in power but still her flames are blue. i suspect they are blue because of her name. azula translates to blue in english. it is also possible that she is a freak of nature like toph who invented metal bending and that she could have eventually surpassed even ozai with her blue, more powerful flame.

It is somewhat physics based in that the centre of a flame is blue in colour, thus the idea that blue flame burns the hottest, you can see it with other firebenders in general weaker benders will use orange flames while stronger one will use some more closer to a pure yellow although for most of them the difference is very hard to tell.

Thus Azula's blue flames serve as a testament to the fact that she is a firebending prodigy in the same way that Toph managing to bend metal shows how she is a earthbending prodigy.

It also is indicative of her personality, the name Azula is very close to several words that mean blue, the colour blue is what is described as a cold colour thus tying into Azula's personality which is distant and cold as well as goal oriented.

Blue is also linked symbolically to attributes such as intelligence and power again tying in to Azula's talent and training which allowed her attain blue flames.

It's possible that her flames are blue due to her heritage. If you read the search you'll see that Zuko isn't Ozai's biological son, thus making Azula the only great grandchild of both Roku & Sozin. Being the spawn of two firebenders of such awesome power, she was bound to conquer new feats in the art. Her flames may possibly be more spiritual rather than just hotter.

Her name Azula means blue in English, and her flames are blue, its a metafora for her cold personality, and what she represents in the show. Also Zuko is the hot-headed in the show, because it was always mentioned that he doesn't have the control over his emotions nor the patience which is required, because he got angry if he didn't succeed at the very first time. In lots of animes there are two types of charachters: the one with driven more by intelligence and not by emotions, those characters' outfit is blue, and those emotive characters, like in Samurai Champloo Mugen,( the bandit, who had amazing skills, he didn't give a shit about rules, and he was way more opened than Jin, the almost honorable righteous one, with his ortodox moves ) who seem a little unperfect, because their emotions are stronger, and not perfectionalists. In the show in was meant to show that the emotions ( which reperesented by Zuko, his struggling, because he wasn't satisfied with himself being the Fire Lord's perfect little prince at the end) are more important than being perfect but empty, or in Azula's case living with suppressed feelings. I'm not saying, that A:TLA is an anime, but this part was certainly something borrowed.

Azula comes from two powerful bloodlines (avatar and fire lord). You may be asking why Zuko then doesn't have blue fire as well, that is because Ozai isn't his father. Zuko only has an avatar bloodline so he isn't as powerful as her. Sozin made sure Ozai married Roku's daughter because he knew they would have a powerful child. Watched videos on youtube and read it on the Legend of Korra site on nickelodeon. Go to Zuko's page or his grandson's page.

I believe that it is in reference to Iroh's comment about lightning being "The cold blooded fire". Because Azula is always completely cold blooded, her flames reflect that.

Azula could produce blue flames because she was the strongest fire bender in terms of sheer, raw power; beyond Ozai, Azulon, or Sozin. It was the desired result of Ozai marrying Avatar Roku's grand daughter to combine that bloodline with that of the Fire Lord. The combined power merely wasn't passed down to Zuko. It wasn't any different than siblings that have different eye color, hair color, facial features, height, or even complexion. Azula drew the lucky straw.

I have a theory. Maybe Azula's fire is blue as an easter egg for translations, but wait!

What if Azula's fire is blue because as everyone here probably knows the modern (TLA) form of firebending is through rage and hatred Azula's fire is probably blue because even though Sozin started the war with Sozins Comet he was crazy, Ozai has a mental state worth questioning but he (although I hate him) Has logic and a capacity to spare lives and people and he is crazy with power but Azula? Jesus man we have just reached a whole new flippin level of crazy and psychotic behaviour she is compared as powerful as Sozin and Iroh but she has something they dont... She has a higher mental state than anyone in the series combined sure when she fought Zuko she was loose on a screw crazy. Getting to my point. She more than likely has blue fire as other people have mentioned because it is the hottest part of a naked flame but she is crazy hot headed and she cant help but create blue fire. I dont know just a theory.

I initially though Azula's blue colored fire was a defining factor of how different and skilled she was from other firebenders. And didn't Azulon, her grandfather, have a blue fire too? That was why she was named after her grandfather?

7
Apart from Azula, has there ever been a Fire Bender with Blue Fire?