What's the story behind the mugs in Deep Space Nine and Babylon 5?

As much as I personally love Deep Space Nine, a case can be made that major features of the show were ripped off of Babylon 5. Although the first episode of DS9 hit the airwaves six weeks before the first Babylon 5 television film, it is widely known that Paramount had access to Babylon 5 creator J. Michael Straczynski's show bible for some time. (For further reading on this, see here.)

Apart from the broad similarities, I noticed that the same distinctive style of mug appears in both shows.

Raktajino (Klingon coffee) and its preferred serving mug appear for the first time in the Season 1 DS9 episode "Dax", which aired February 14, 1993. Here is a screenshot from the episode, showing Dr. Bashir with the mug: 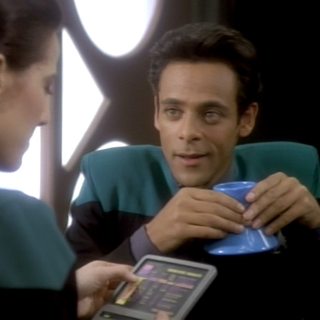 Now here is a nearly identical style of mug in Babylon 5, as seen in its Season 1 episode "Eyes": 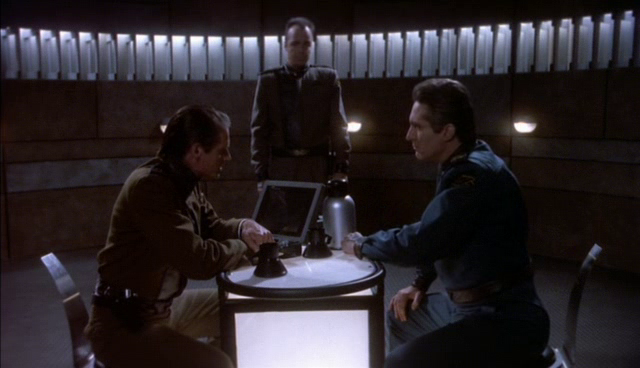 This episode aired on July 13, 1994. The mugs began appearing in Babylon 5 a few episodes prior to this one, but they still appeared in DS9 more than a year earlier.

Is there a story behind the use of these mugs in Babylon 5? Was this a subtle attempt to draw attention to DS9 having copied crucial elements of Babylon 5 ?

Update: As a commenter and an answerer have pointed out, these mugs have a real-world naval precedent, but consider the following:

I believe this style is a no-spill mug for ships in heavy seas. That would mean both shows drew inspiration from the same real-world precedent.

The important thing to note is that in DS9 there are two types of Raktajino mugs:

This site claims that:

These mugs were made by HighWave and were called “HotJo”. The model line was modernized however, so that the older ones are not available anymore. The current HotJo mugs were also used in later seasons of DS9 however.

A quick search on the Highwave site results in this 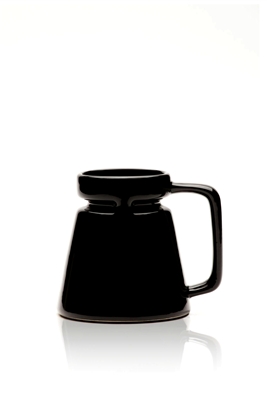 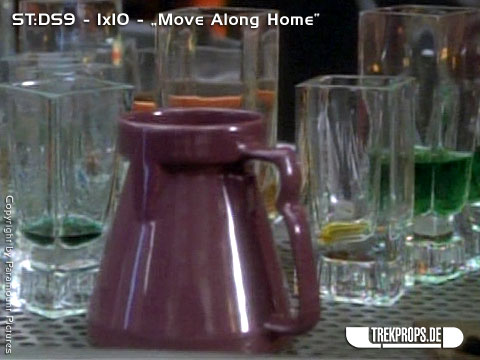 Mugs from the Replimat

Again from the same site

Here's a picture of one; compare it to the one in the question that Bashir is holding: 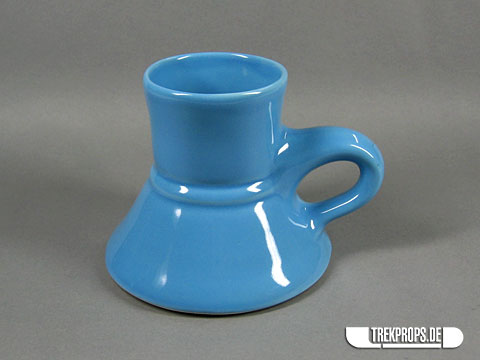 Back to the Question

So, we're focused on the mugs from the replimat from DS9. Now, if you look very closely at the photo in the original question, you can see the handle on the Babylon 5 mug is much more angular than the one in the above picture of the mugs from the Replimat: 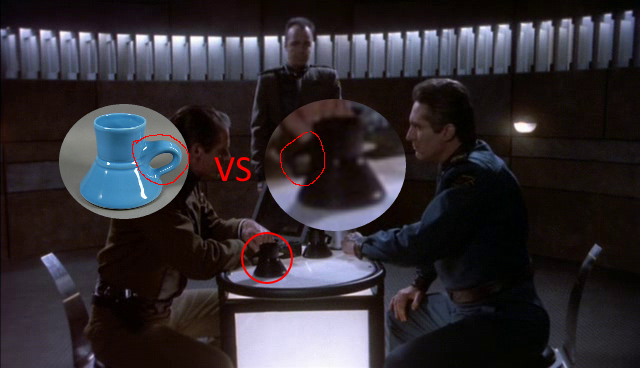 Nevertheless, there are some clear similarities in the design.

In a quote in 1996 about the similarities between the two series generally from Straczynski said:

For now, I'm asuming [sic] it's all just coincidence.

So, considering that Straczynski did suspect there was some copying occurring, but gave them the benefit of the doubt, to me it seems Straczynski wouldn't have ordered this intentionally. To my mind, the most likely explanation for this is that both companies approached a different manufacturer and selected different, but similar, mugs that looked futuristic. The fact that they look awfully similar is probably simply because they were being produced around the same time so the concepts of what constituted 'futuristic' were similar.

Now, I've gathered all the evidence I can find to support this contention, but ultimately it is just speculation based on evidence on my part.