What Is the Significance of the Cyclonic Beam of Light in Minas Morgul in LOTR: ROTK?

In LOTR: ROTK, as Frodo, Sméagol, and Sam approach Minas Morgul to make their climb to the Cirith Ungol pass, Frodo is somehow drawn to Minas Morgul and stumbles a few paces up the road leading to its gates. An enormous, cycling energy beam spirals out of Minas Morgul and up to the sky; Gandalf and Pippin observe it from Minas Tirith. I assume it has some meaning and/or significance, as it was left in the movie.

What is the beam of light at Minas Morgul for? 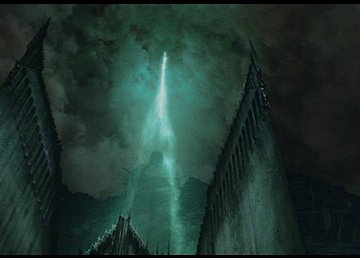 As per TVTropes, of all places to get a good solid factual answer :)

The book tells us that this particular pillar is produced in response to one from Barad-dûr. The exchange is essentially Sauron (at Barad-dûr) asking "Are you ready?" and the Witch-King at Minas Morgul replying "Yes!"

Here's the relevant passage from "The Two Towers" that seems to confirm that this was either a "We are ready" or "We acknowledge the order to move out":

The great rumbling noise, louder than ever before, rolled in the ground and echoed in the mountains. Then with searing suddenness there came a great red flash. Far beyond the eastern mountains it leapt into the sky and splashed the lowering clouds with crimson. In that valley of shadow and cold deathly light it seemed unbearably violent and fierce.
...
And Minas Morgul answered. There was a flare of livid lightnings: forks of blue flame springing up from the tower and from the encircling hills into the sullen clouds.
...
Across the narrow valley, now almost on a level with his eyes, the walls of the evil city stood, and its cavernous gate, shaped like an open mouth with gleaming teeth, was gaping wide. And out of the gate an army came.

As a side note, for those who didn't notice this specific detail among the wall of quotes - while the movie scene was in the ROTK (as per the question), the equivalent scene is in "The Two Towers" book.

The green light showed before Osgiliath; I bet it was to show that they are going to attack. Because if you see once it's shown all the Nazgul and the army march out and begin to take over Osgiliath fully and then attack Minas Tirith.

Not the answer you're looking for? Browse other questions tagged tolkiens-legendarium the-lord-of-the-rings movie or ask your own question.

12
What is the significance of Gandalf's Moth?
15
Why does Sauron’s darkness over Gondor disperse before the set time?
14
What is the distance between Minas Tirith and Minas Morgul?
13
What is the flash of light from Minas Tirith?
5
How accurate is the depiction of Minas Ithil/Morgul in "Middle-earth: Shadow of War"?
4
What is the role and related lore of Andrast in LOTR?