Name of a YA sci fi anthology?

I have been trying to locate an anthology of young-adult sci fi short stories that I read in primary school in the late '90s (I do not know when the book itself was published). I can only remember a few elements:

The cover art of the one I was reading featured a large greyish land vehicle like the one described in 3. I remember there also being a lot of yellow used on the cover.

Based on the description of the stories I would say this is a collection called Galactic Adventures (also published as Purnell's Book of Adventures in Space in the UK). The only story that is not familiar to me is the first one. All of the others appeared in the volume I mention. In particular the story about the commandos and the tank like vehicle would be called The Null Gravity Beam. These are the publisher's details...

I would say it was aimed at readers younger than the YA set as it was illustrated. 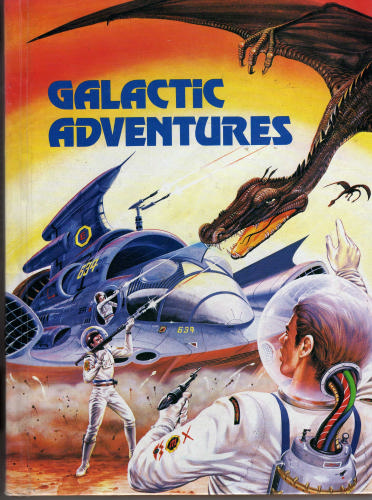 11
Convicted criminals serving time as insects in space
2
Need to find the name of a movie made in the 70's
6
Sci-Fi Story from C.1990 featuring invisible wires - name of the collection?
21
Anthology book with story about robotic bombers
5
Trilogy about an alien craft that crash-lands on a farm on Earth, someone learns how to use it
5
A Science Fiction novel regarding Earth, the Moon & Venus
11
A novel involving philosophy and hyperspace, ca. pre-1990
13
70s/80s Sci-Fi book with teleport gates on sub-light spacecraft and an army space suit
8
Old school horror/sci-fi illustrated anthology