How did Loki's scepter end up in Strucker's hand at the start of Avengers: Age of Ultron? [duplicate]

There is a major turn of events left unexplained by the Marvel Cinematic Universe.

At the end of first Avengers movie (in 2012) we learned that Thor took the tesseract back to Asgard along Loki (as his prisoner).

Can someone explain how and when did the scepter switch ownership?

After the battle of New York the scepter was confiscated by S.H.I.E.L.D.

Since Hydra had infiltrated all of S.H.I.E.L.D., it eventually found its way into the hands of Baron Von Struker, a top Hydra scientist. 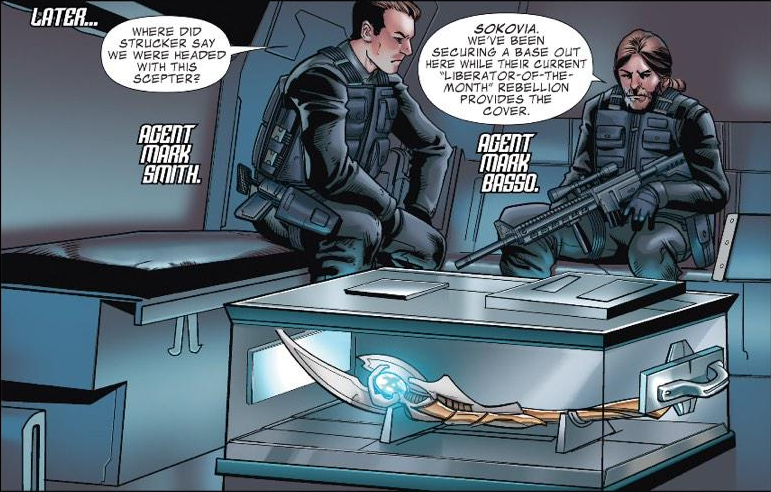 From the Age of Ultron prelude comic book.

After the fall of S.H.I.E.L.D. and the realization that Hydra was amassing weapons and alien tech, the Avengers decided they needed to recover the scepter and send it off world with Thor.

In Avengers Endgame you see that Sitwell, Rumlow, and other Hydra agents collect the scepter after the battle of New York.

This is explained in the comic prequel; "Age of Ultron Prelude: This Scepter'd Isle".

In short, after the Battle of New York, the Scepter (along with all of the other alien tech recovered) is placed under the custody of SHIELD. Strucker's men manage to steal it when it turns out that half of SHIELD is actually working for HYDRA.

You can see the relevant panels below.

This fills in the gap between "The Avengers" and the ending scene from "Captain America: Winter Soldier"

28
How did HYDRA get hold of Loki's scepter?