Which Batman Series has had the most batmobiles to date?

I recently saw the infographic below and it gave me an appreciation of just how many different batmobiles there have been. It got me to wondering though which Batman series (to date) has had the most batmobiles?

By 'series', I mean a single television series, or a movie series or comic book series i.e. where there is direct continuity, not re-makes which introduce a new batmobile. 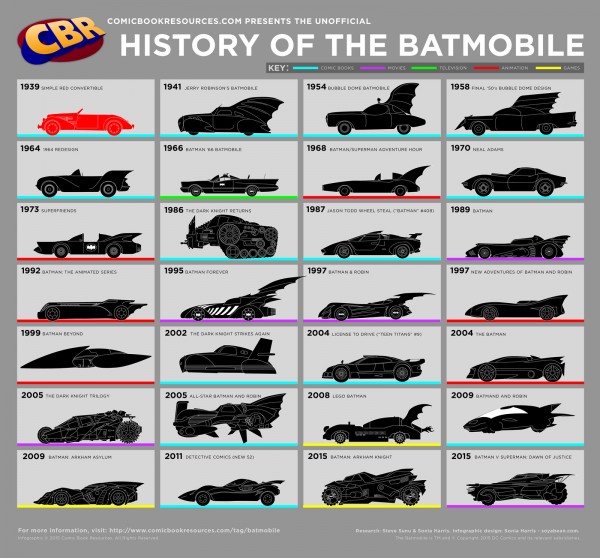 This answer is preliminary, incomplete and therefore quite possibly wrong, and it is only based on the movies, tv shows and video games. For a very complete list of Batmobiles, see this interesting and excellent resource.

To try and answer your question, here is what I could count when you take into account the continuities:

Continuity 7 - Batman the Brave and the Bold

Another resource can be found here.

Not the answer you're looking for? Browse other questions tagged dc batman transportation or ask your own question.

14
The New 52: What Titles Don't Mix Continuity For New Reader?
10
Was Smallville (the show) ever considered canon in the DC universe
5
Could Green Lantern: The Animated Series be considered part of the DCAU?
6
Where does the new 52 start?
32
How many people have deduced Batman's secret identity?
13
Is Alfred the moral conscience of Bruce Wayne/Batman?
10
How long has Batman been "The World's Greatest Detective"?
7
Is the Vertigo (especially post-"Lucifer") continuity now completely separated from DC comics?
11
Was there ever a film, comic, or toon where Batman had Spider-Man's (or Spider-Man-like) powers?