Is Batman ever shown explicitly using the Scientific Method?

Is there any example of Batman explicitly following the Scientific Method? At the very least, on the level of "here's my (falsifiable) hypothesis, here's the test I'll run to confirm/deny it, here's me running the experiment, here's the result".

If not, he's not a scientist - no matter what DC artists/writers claim!

I don't care what the media is - e.g. comics/cartoons/movies - as long as it's something considered canon.

This is a yes/no question, therefore I'm only looking for one example, or for a canon/authoritative explanation why none of the examples exist (e.g. "Lucius Fox/Alfred is meant to be a scientist figure").

I seem to vaguely remember both Peter Parker and Reed Richards shown actually doing science experiments, so the idea doesn't seem all THAT implausible for a comic where the hero is officially labeled a genius and a scientist.

I have to say that I think using whether or not someone employs the scientific method or not is not a good test of someone being a scientist.

People we refer to as scientists today don't necessarily employ the method themselves, coming up with hypotheses and having other members of a team to do experiments and falsify them.

A scientist in a broad sense is one engaging in a systematic activity to acquire knowledge. In a more restricted sense, a scientist is an individual who uses the scientific method. 1 The person may be an expert in one or more areas of science

Batman certainly engages in systematic activity to acquire knowledge and is an expert in several areas of science.

As for the question, he has certainly engaged in the scientific method. I don't know that it has been shown in valuable comic book frames, although references have been made to him doing experiments until he manages to find a cure.

He came up with antidotes for joker venom and fear toxin and was even able to synthesize kryptonite. A better question might be since he alone has done such things, could he have done them without being a scientist and employing the scientific method?

Here is an image of him doing what seems to be a science experiment, to the same extent that Peter Parker or Reed Richards are shown: 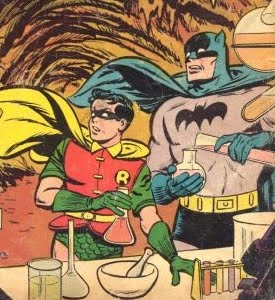 Batman is a detective first and foremost, and everything else he does is second. The martial arts, athleticism, technology and science, all come in second to his detecting.

That being said, there are many times where he has gone through the process of "I hypothesise this, I conduct an experiment to test my hypothesis, my results align / don't align with my hypothesis, therefore my conclusion is this..."

However, it's presented as this: "I suspect X person of Y crime, I investigate X person, I interrogate X person, my suspicions are confirmed/denied".

As for specific examples, check out Dark Victory, Long Halloween and Heart of Hush. Those are probably the best examples of Batman's deductive abilities.

I really doubt it, simply because real science doesn't make good drama. The writers are more likely to show Batman picking up some bit of evidence on one page, and the next page (X hours later) he's in the Batcave telling Alfred or Robin what he's learned about it. While it's perfectly plausible that he used the scientific method during those X hours, it's not something that would be explicitly shown.

Batman is not a scientist. Batman is a detective.
I suppose with no government backing he's more of a private eye.

He's meant to be a detective. A private eye, judge, jury, and sometimes executioner. As a detective with no "lab staff" backing himself up he is also a jack-of-all trades.

The scientific method is used largely to document results. As a secret operation, he can have whatever method he wants. Lab technologists in hospitals do very little of this "scientific method" in entirety, but they do make guesses and test these, which is something Batman also does. Testing your guesses and performing controlled experiments is the core of the scientific method, so by that token we all to varying degrees perform this method. Where the bottom falls out of this designation is the documentation, which doesn't work well with untested hunches, which we and Batman regularly employ.

On the other hand, a scientist is defined as "one who engages in systematic activity to acquire knowledge". A definition that is about as exclusive as "skin haver".

15
Is Batman a scientist?