I borrowed and read this book (in English) from a local library in Rancho Bernardo, California as a child in the early to mid 90's, no later than '96. The collection itself may have been written in the 80's or earlier. The cover of the book was a light green, and on the left side it had an image of a drawn tropical forest with animals in it; on the right side was the book's title and editor. Many of the stories were about werewolves, but the collection overall was about people turning into various animals. A couple of them stood out very powerfully:

There were many other stories in this collection but these are two I remember the most about. I don't remember any author's names or the editor's name. 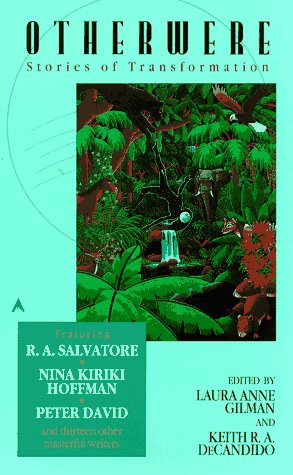 These masterful tales do not involve werewolves, butr a wonderfully diverse assortment of creatures including a serpent, a child, an elephant--even a right-wing Republican. Blending elements of fantasy, mystery, comedy and mythology, these extraordinary tales take lycanthropy into an entirely new realm.

The elephant story is Jody Lynn Nye's "What, And Give Up Show Business". I don't know which one the salmon story is, but this reviewer mentions a were-salmon.

Not the answer you're looking for? Browse other questions tagged story-identification werewolf shape-shifter anthology-book or ask your own question.