I'm looking for a really weird book or story I read a while back. There were weird creatures disguised as humans. A man makes the mistake of having sex with one of the them and ends up having a mask put on his face that he can never take off, and he has to wander around naked for a while. Then he has to fight a giant serpent. Or something like that.

This is the famously weird novel Time Snake and Superclown (1976) by Vincent King. 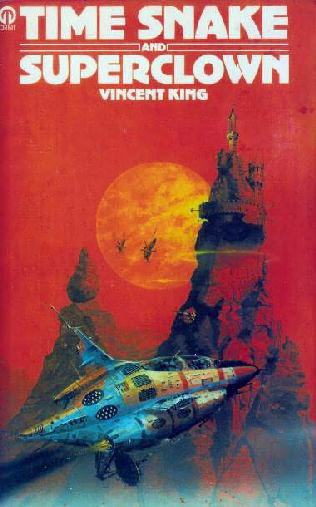 The main character, a "Watcher", is charged with looking after the human race, which are now human in appearance only. Humanity seems to have been replaced by "wraiths": they are "dead" on the inside but wear a kind of synthetic skin on the outside that makes them appear human. He mates with one of these wraiths, and she subsequently permanently transforms his face into a clown face. I'm not sure that he has to walk around totally naked, but she does steal his pants — something that he is not aware of immediately. He wanders around bottomless for a good chunk of the book.

By the end of the novel, he fulfills his destiny, which is to battle the Time Snake.

It's been called the most demented novel of all time.

7
Identify collection of stories, which included Borge's Library story
7
Cartoon short film involving mission to a Mars base which fired missiles to Earth containing creatures
5
80's/90's movie: man and woman driving through a red desert planet
9
Man moves to country & discovers exploding crawfish
25
Story about a man who keeps getting old and going back in time to give his younger self some guidance
4
Horror about a haunted blue Oni mask
8
Webcomic about a demon, a humanoid and an angel
16
Collection of science fiction short stories, one of them has an astronaut travelling to a planet with aliens breeding naked humans