About the subliminal message in Serenity

I have a question about that. In "Serenity", River Tam is shown a subliminal message in an advertisement, a code that was floating around for weeks.

Now, here's my question, broken into short ones. Who broadcasted that message? How did that person know what to broadcast and what effect would it have on River?

I see multiple issues with this. I always assumed it was the Operative who ordered the broadcast, to trigger River and locate her. But now, there's a problem. He's operating under need-to-know-basics rules so extreme he's kept in the dark almost as much as any other citizen. The Miranda revelation shocks him so much he basicly signs his death sentence at the end of the movie. His task was to protect secrets he knew nothing about.

Then again, how would anyone know it was about Miranda? Nobody spoke of it, River just kind of read the minds of key members of the Parliment by chance (in silence or with painful screams). I'm pretty sure they hold many secrets. Why that one? Were they broadcasting just about anything for weeks hoping it will go unnoticed?

How anyone would know how River would react? She really didn't have to freak out, she might've just woken up and went "Guys, Miranda. Bad place, sleepy place, ultraviolence, don't go."

And again, broadcasting it was such a risk... someone could've intercepted it. Like Mr. Universe. Had he decoded it, he'd probably figure out something was up.

What's up with that message? Is it just an enormous plot device?

It was always my impression that the message had nothing to do with Miranda.

Rather, the subliminal message simply amounted to a single command: Attack. The idea is that River would see it, freak out, attack everything and everyone in the area (and be damn effective at doing so), and then all the Operative would have to do is look for headlines about crazy-violent girls. 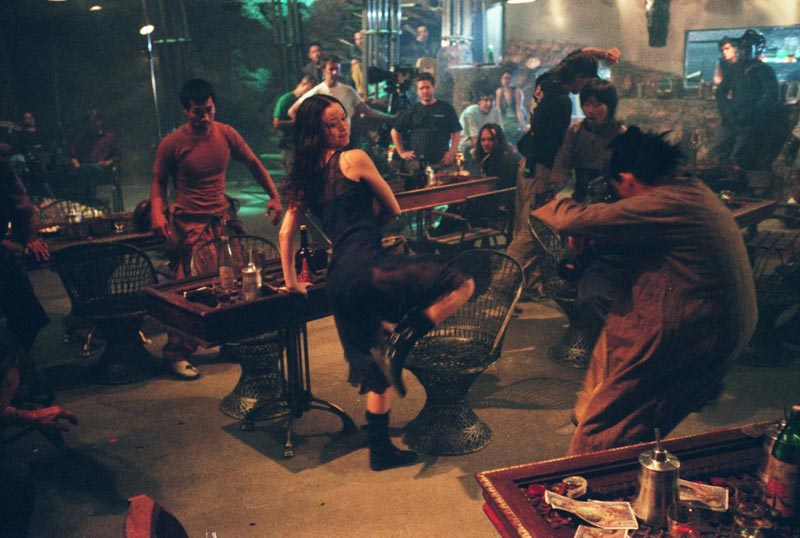 In my interpretation, River's whispered line "Miranda..." had more to do with her own mental processing. Her memories of Miranda were slowly beginning to resurface, independent of that message, and the triggering of her Alliance programming may have spurred further remembrances from her time in Alliance control, which is when she learned about Miranda.

It's clear that the tension from having the Miranda memories bottled up inside her was causing her considerable stress. As evidence, look at how much calmer and more settled River is by the end of the film: having finally released that tension and confronted the memory, she heals considerably.

This indicates that she was suffering from that repression before the message was broadcast, and that the message was much simpler in nature: a trap to make her reveal her location, completely unrelated to any specific secrets she may be holding.

The Operative knew about the conditioning of River, and either had no knowledge of Miranda or didn't care. As he said in the movie-

"Secrets are not my concern. Keeping them is."

As shown by the off hand way that he disposes of the doctor, he doesn't care about anything but his mission to get River back. During this scene, he also tells the assistant

So he knows what will trigger River, and that it would create an incident that he could track on the feeds (As shown in the bar with the meeting between Mal, Fanty and Mingo, they pay the waitress to block the camera with the fans).

So the Operative knows what will trigger River, sends it out in the embedded Fruity Oatey Bar commercial, and waits for an incident to happen. The utterance of the word "Miranda" is unrelated, other than having Academy conditioning coming to the forefront and taking over, and presumably releasing other memories associated with the Academy and her time there.

River recalled Miranda because River was not herself...

The context is landed out entirely in the opening exposition.

Who is River Tam?

DOCTOR MATHIAS: See, most of our best work is done when they're asleep. We can monitor and direct their subconscious, implant suggestions. It's a little startling to see, but the results are spectacular. Especially in this case. River Tam is our star pupil.

DOCTOR MATHIAS: She's a genius. Her mental capacity is extraordinary, even with the side-effects.

SIMON: Tell me about them.

DOCTOR MATHIAS: Well, obviously, she's unstable... the neural stripping gives them heightened cognitive reception, but it also destabilizes their own reality matrix. It manifests as borderline schizophrenia... which at this point is the price for being truly psychic.

And later in the conversation:

SIMON: How is she physically?

DOCTOR MATHIAS: Like nothing we've seen. All our subjects are conditioned for combat, but River... she's a creature of extraordinary grace.

River Tam is a psychic subjected to behavioral conditioning and neural stripping. More importantly she, like all their subjects, have been conditioned for combat. It is likely that combat conditioning that was triggered in the bar fight.

DOCTOR MATHIAS: Key members of Parliament have personally observed this subject. I was told their support for the project was unanimous. The demonstration of her power…

Who did River observe?

THE OPERATIVE: Key members of Parliament. Key. The minds behind every diplomatic, military and covert operation in the galaxy, and you put them in a room with a psychic.

DOCTOR MATHIAS: Whatever... secrets she might have accidentally gleaned... it's probable she doesn't even know she knows them. That they're buried beneath beneath layers of psychosis

Not the answer you're looking for? Browse other questions tagged plot-device serenity or ask your own question.

32
How are the series Firefly and the movie Serenity linked?
17
Are there natural psychics in Firefly/Serenity?
26
Is there any more media in the Firefly/Serenity universe?
2
Times River appears sane in Serenity or Firefly?
18
Why does Serenity have a cannon in “Serenity”?
19
Where is Inara during “Serenity”?
41
What was the point (out of universe) of house-elves?
7
What is “fluffy” in Serenity?
19
Chinese in Serenity?
1
Burning skeletons during launch of the spaceship Serenity