Does Namor the Sub-Mariner still possess the powers of all sea creatures?

In the Marvel Comic Strange Tales #107 (April 1963) by Stan Lee, Larry Lieber and Dick Ayers, Namor the Sub-Mariner is depicted as being able to puff out his body "as a puffer does." 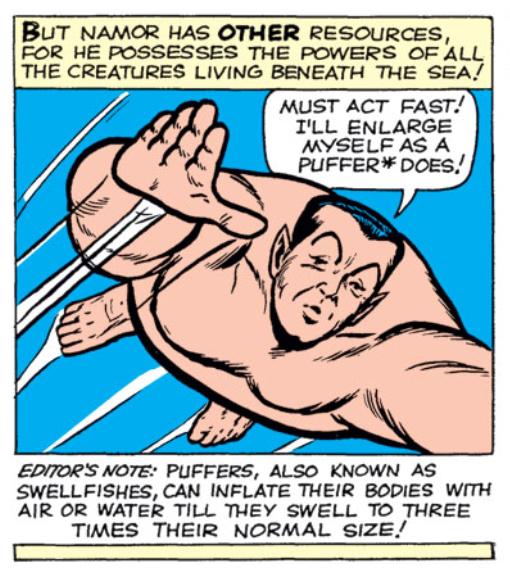 The justification given is that he "possesses the powers of all the creatures living beneath the sea." From reading most all of Namor's appearances over the last few years, not only does he never use this incredible puffing power, he doesn't seem to have any real power besides super strength and resilience. Does Namor still possess the powers of all sea creatures, or was this just a one-off, goofy Silver Age moment?

According to the dubious Wikipedia*:

After he was revived yet again in the 1960s by Stan Lee and Jack Kirby, Namor demonstrated powers of various sealife that had not been shown in earlier stories. However, an editorial note in Marvel Tales #9 (July 1967), stated explicitly that "nautical Namor has since lost his power to imitate the characteristics of fish..." According to one of Sub-Mariner's scripters, Roy Thomas: "As for Namor's electrical and other sea-creaturely powers. They were used in one or two stories in F.F. and the Human Torch series in Strange Tales, then dropped - as one of Stan [Lee] and Jack [Kirby]s early (and quite forgivable) mistakes. The explanation, given in a reprint of a Torch/Namor bout a few years later, was that he had these powers only for a short time and then lost them."[11]

To answer your question, it was just a limited characteristic of his abilities during the Silver Age comics.

*I consider everything on Wikipedia to be at least partially suspect.

yes he still has these powers, it depends on the writer and enemy he is fighting. the electricity of an eel, seeing in the dark and radar sense are all present in the 90s. in the recent one shot "namor - the best defense" (2018) he demonstrated these powers again.

14
Does Wolverine's regenerative powers prevent him from successfully shaving?
3
Why is it that Cyclops and Havok are immune to each other's powers? Does this apply to all mutant siblings?
9
If Thor does not hold Mjolnir, but he is worthy, does he possess the power of Thor?
10
Did Thanos use all the powers he had in the film?
27
Why does Fury's blind eye still have security access?
8
What powers does the Soul Gem have?
20
In the comics did Thanos “kill” just sentient beings or all creatures with the snap?
7
Does Thanos have the same powers in the MCU as he does in the comics?