Aquaman has control over all creatures of the ocean. Cthulhu is a creature of the sea (arguably). Can aquaman control Cthulhu? If not is it because Aquaman is not powerful enough or because Cthulhu does not count?

Although this power is most often and most easily used on marine life, Aquaman has demonstrated the capacity to affect any being that lives upon the sea or even any being evolved from marine life.

Cthulhu! I command you to do my bidding! 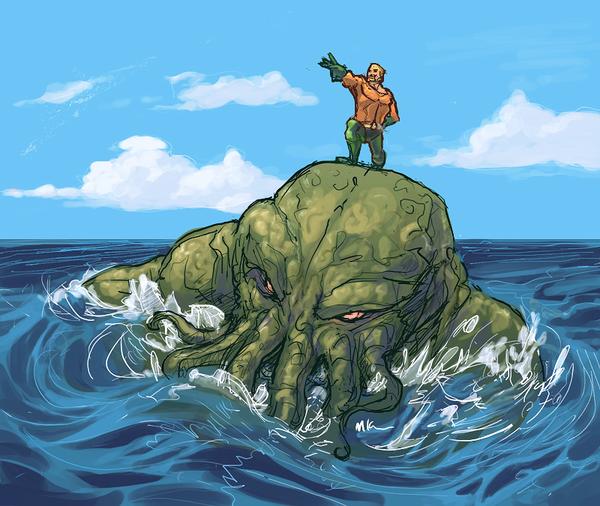 Isn't Cthulhu a god/alien? He may currently in the sea, but he's not a "creature of the sea" - and will not always be that way.

Cthulhu is a Great Old One and is by far the most prominent member of the group. He currently lies in death-like sleep in the sunken city of R'lyeh somewhere in the Southeast Pacific Ocean. "When the stars are right", R'lyeh will rise from the sea, never to sink again, and Cthulhu will awaken and revel across the world, "ravening for delight" (src).

He's also not necessarily fully "aquatic" biologically: "simultaneous pictures of an octopus, a dragon, and a human caricature". And I'm not sure that Octopoid physiology fully implies aquatic evolution.

Please note that "Great Cthulhu is one of the Water Beings" is from Derleth's scheme, NOT from Lovecraft himself.

Cthulhu is definitely not an aquatic creature, despite the octopoid head. (Lovecraft sketched the monster once, and drew it with 6 eyes like a spider's.) It came from the stars and was not made of terrene matter. In its first appearance, "The Call of Cthulhu", it is stated that when its city R'lyeh sank beneath the ocean, it could no longer influence men with telepathic communication, because something about the ocean cut off all such broadcasts. Surely if it was aquatic, its powers would not be adversely affected by seawater.

After Lovecraft's death, August Derleth made Cthulhu a "water elemental", despite all the evidence to the contrary. So if Aquaman is in a Derleth story, yeah, he can control Cthulhu. If by some accident he blunders into Lovecraft's original, he's one more sardine for the Old One to gobble.

Cthulhu has octopoid features and is trapped underwater, but he is not a sea creature. In fact, in "The Call of Cthulhu," it's mentioned that the water is actually a bad thing from his point of view, because it blocks his telepathic communications with the cult and keeps him and the rest of the Great Old Ones imprisoned. August Derleth tried to make him into a water elemental, but August Derleth can go jump in a lake.

Cthulhu is not of the sea. He is not of this world at all. He is simply sleeping there for some time.

I would say it largely is based on the point in the Cthulu mythos evolution your talking about.

Early mythos: yes he was a great sea creature and a priest.

Late mythos: no, he was a god that was under the sphere of water.

Aqua man doesn't use "mind control" for fish, he talks to and persuade them, he can bend them, but not force them to do his own bidding. Secondly, it also matters not because he can communicate telepathically with humans to, in one comic he caused one guy to have convulsions just by concentrating and caused the evil Kordax to kill himself by unleashing an intense mental attack.He can swim up to about 1000 knots (about 1,150 MPH) and has the body strength to throw a car like a football, so he could penetrate the skin of Cuthulhu with his trident while using his mental powers to annoy him. I think that they both would see no reason to kill each other unless they were hindering the other's progress and frankly think that they would make a good team. Besides, once a year Aquaman fights a cthulhu-like alien form another dimension, in which he has never lost. Aquaman can travel to different dimensions as well as time travel, perhaps where he lives, and maybe make allies with him.

and considering he mind-controlled Tiamat into eternal damnation, yes, he absolutely could control Cthulu. pretty sure he has.

and the DC version of Cthulu (or, the Night Gods, anyway), live in a parallel dimension, and try to cross over into Earth's oceans once every year- always stopped by Aquaman.

Not the answer you're looking for? Browse other questions tagged dc cthulhu-mythos aquaman or ask your own question.

18
Is there a Batman-Lovecraft connection?

2
Does Aquaman have Scales?
25
When did Aquaman lose his left hand?
7
Is the Aquaman symbol an 'A'?
2
What titles does Cthulhu have?
3
Why did Cullen Bunn leave Aquaman?
10
Has Aquaman ever been a merman?
3
Who is this female character near Aquaman, painted by Stjepan Sejic?
12
How many languages does Aquaman speak?
2
Why is the Cthulhu Mythos named after Cthulhu?
19
How large is Cthulhu?