In which Science Fiction (probably Star Wars) story is FTL used to jump to other side of a planet?

I remember experiencing (reading, I think) a science fiction, or space opera, story in which the main characters are on a ship, perhaps fleeing from someone, and the use a Hyperspace jump to get to the other side of a nearby planet. Character 1 thinks they jumped through the planet, but Character 2, who performed the jump, reveals that they actually jumped around the planet.

I think that it is a Star Wars story, since most of my Science Fiction/space Opera reading have been Star Wars, but it could be something else as well.

In which Sci Fi story is a FTL jump used to reach the other side of a planet?

The Star Wars Wiki contains an article entitled Precision Hyperspace Jump, which this could qualify as. The story I'm thinking of is, however, not listed under Appearances in this article, because I have not read any of those books.

On suggestion in comments, I've tried to recall a few more things and listed them below. I am 100% sure of these details, though.

I seem to recall that the conversation between the two characters went something along these lines:

Person A: "You jumped THROUGH the planet!? How is that even possible!?"

Person B: "Not through. Around. [something about how he/she did it]"

Of course, this is not actual quotes, but rather a recollection of the feel of the conversation after the jump had been made.

I think you're referring to the Stargate: SG1 episode Failsafe, when they use hyperspace to jump their ship (and the asteroid they're standing on) directly through the Earth.

This plot device is used in the book Starhammer by Christopher Rowley when the starship freighter Orn travels around a Gas Giant to escape the primary lasers of the battleship Illustrious of the Laowon Imperium.

The book is the first of three set in the same universe which contain The Vang (an advanced parasitic lifeform).

In the first book, The Worlds of Man have been dominated (and humans enslaved and experimented upon) by the alien Laowon Imperium for more than a thousand years. But an ex-laowon slave gets caught up with some free rebels who have discovered an ancient weapon so powerful that it can destroy the Laowon Tyranny. But the Laowon Imperium is close behind while the human rebels attempt escape...

Quote from the book about the FTL jump around the gas giant:

"On the far side of Nocanicus, opposite where we were. We performed a simple, random-gravity flip-flop. Our jump spin was absorbed by the star. We traveled around its gravity centre along the lines of the magnetic field. It increased our chances of survival by twenty percent."

All three books are excellent: 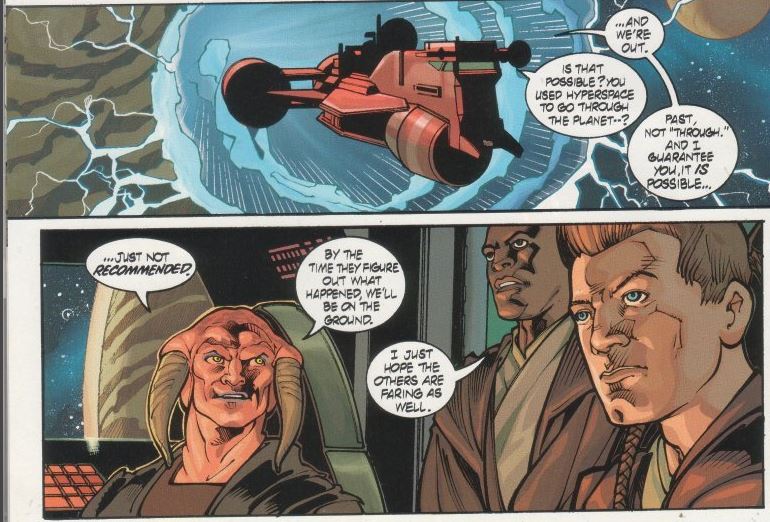 To start with, this is Star Wars (as indicated in the question). That said, the person making the jump is Saesee Tiin, not Jaina or Jacen Solo, and it is not post ROTJ legends, but, I believe, pre-Phantom-Menace.

The wording, however, is almost an exact match for that in the question.

Person A: “You jumped THROUGH the planet!? How is that even possible!?” = “Is that possible? You used hyperspace to go through the planet?

Person B: “Not through. Around. [something about how he/she did it]” = “Past, not ‘through.’ And I guarantee you, it is possible…just not recommended.”

Not the answer you're looking for? Browse other questions tagged story-identification star-wars ftl-drive or ask your own question.

12
Science Fiction short story where men have to kill each other to settle some sort of conflict
30
Looking for a story about a woman historian with a "useless" science fiction degree, accompanying star-traveling merchants
20
Science Fiction Anthology, probably 70s
19
Why is it called 'Lightspeed' if the ships aren't traveling at the speed of light?