What is this spell?

Is Voldemort casting Avada Kedavra in this scene in Deathly Hallows II? If not what spell then? 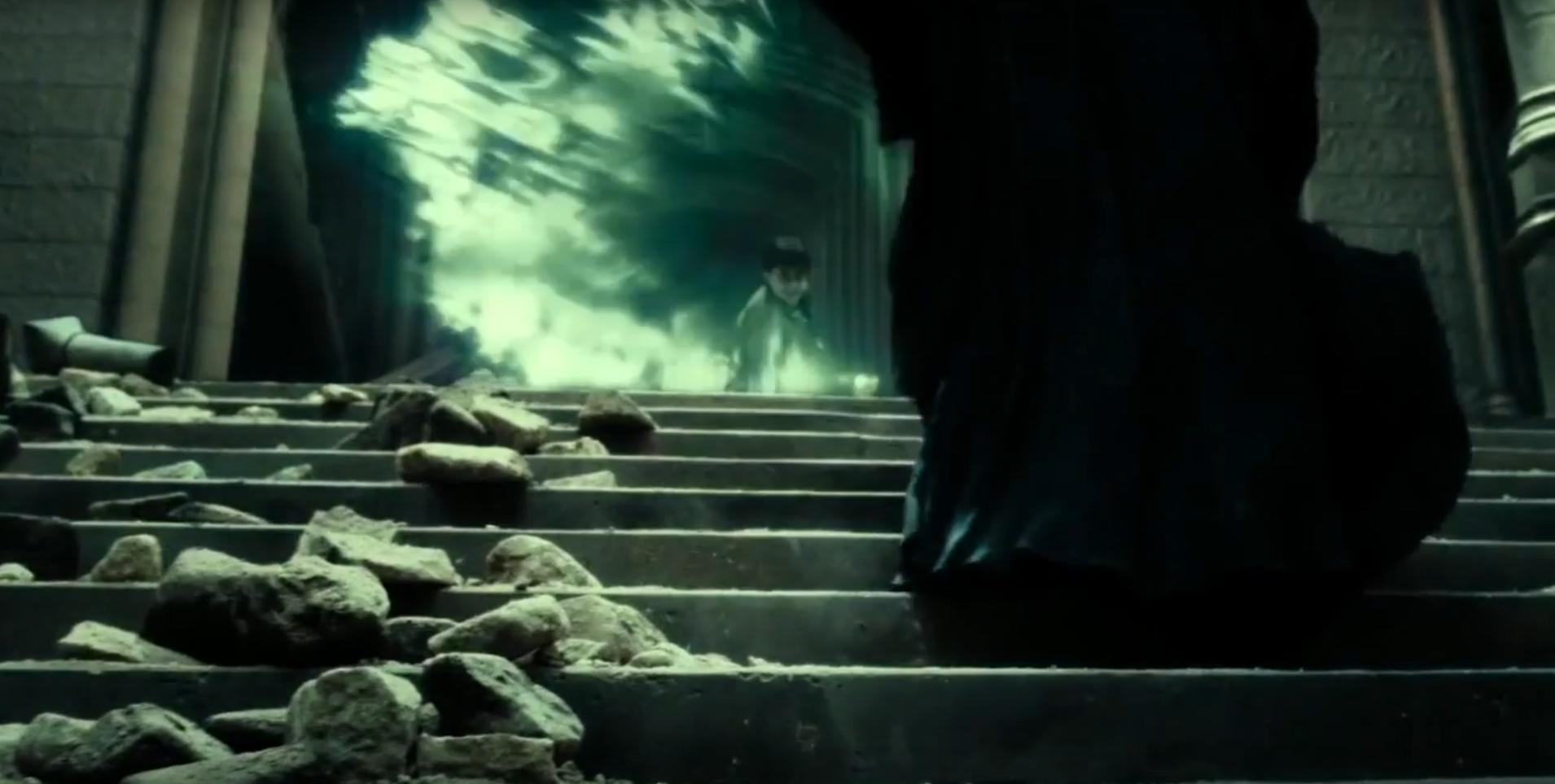 There are only a few things that can block Avada Kedavra: Love magic - Priori incantem - Physical objects.

This can't be Avada Kedavra then, because Harry is indeed deflecting it with something that looks like Protego. So what spell is Voldemort using?

I see from the comments that we have two issues:

Clearly I am writing out of pure speculation:

I feel that the spell used is most definitely Avada Kedavra, mainly because of the signature green flash, the fact that Voldemort uses it almost all the time, and also given the situation: hell broke loose and everyone has chosen to fight - Voldemort got no reason to subjugate/harm professors or students that oppose him. He needs to dispose of them. Oh and also the fact that this is a movie adaptation: I'm sure the director would realize that Voldemort using a green spell that is NOT Avada Kedavra would be very confusing to the audience.

Said that, it boils down to the next question: how can Harry block this supposed Avada Kedavra? The comments insist that Why is Avada Kedavra considered unblockable? shows how is this possible, but the accepted answer does not apply to this context: Harry is not using a physical object, nor is Priori Incantatem possible in this scene and he is definitely not under Lily's protection either. He is obviously using a spell.

My guess is that it is the same reason why Harry's Expelliarmus surpassed Voldemort's Avada Kedavra in the final showdown: Voldemort's wand is not his. The Elder Wand's true master is Harry and hence it will refuse to kill Harry, who happens to be in the middle of the attack. Avada Kedravra was powerless against Expelliarmus in the final scene, and by that fact I conclude the Avada Kedavra used in OP's picture was also powerless against whatever defensive spell Harry used: the Elder Wand will not kill its true master.

There is an obvious flaw with the above speculation. Voldemort should realize that something is wrong. He used Avada Kedavra and Harry blocked it! Why would he continue fighting? This may very well prove that the above conclusions are wrong, or the solution is something much simpler: Voldemort is proud and arrogant and there is no way he is going to flee when the whole crowd is watching him and Harry circle each other to kill.

Not the answer you're looking for? Browse other questions tagged harry-potter movie voldemort or ask your own question.

36
Why is Avada Kedavra considered unblockable?
32
Why was Harry casting shield charms against Voldemort in the Battle of Hogwarts?
9
Why doesn't everyone use Avada Kedavra?
22
How was Harry able to block a Killing Curse conjured by a Death Eater that was aimed at Hagrid in Deathly Hallows?

34
How could Expelliarmus beat Avada Kedavra?
83
Why didn't James' love and sacrifice for Lily protect her?
16
With which spell did Harry Potter kill Voldemort?
18
Why did Voldemort attempt Avada Kedavra at Harry a second time in Deathly Hallows?
6
Why did Voldemort feel the need to check if Harry is still alive?
8
Why didn't the Avada Kedavra cast at Harry at Godric's Hollow come out of Voldemort's wand during Priori Incantatem?
9
If The Ministry has the power to detect what specific spells have been used, how didn't they know that Morfin's memory had been edited?