When I was a kid, around 2008, I read a trilogy of fantasy novels that I've forgotten the name of.

They're about a boy who lives on an island. His father, while doesn't hate him, is disappointed in the boy compared to his brother, who seems to be the very paragon of their order. Their order is comprised of magic-using monks/wizards (don't remember the actual name they used). However, the boy finds his brother being tortured by his own people in a secret room. They are trying to wipe his memory so he forgets magic, exiling him afterwards. The boy is outraged and escapes the island.

Across the island is an empire/kingdom which apparently is totalitarian of some sort. The boy and maybe a few friends(?) sneak into one of the cities for some reason while the citizens are celebrating a mandatory event (I think). Somewhere down the road, it turns out the brother actually agreed to the mind wipe in order to complete a mission given to him by the monks. I feel like a dog is involved but I'm not sure.

It's been years since I've read the books so I don't remember anything else related to the story. I know it's teen fiction and the author is an atheist.

It seems too recent to be "when you were a kid," but Seeker by William Nicholson, the first book in the Noble Warriors trilogy, matches on a few points. 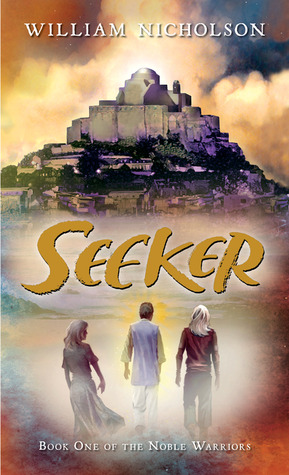 This first novel in the Noble Warriors sequence begins when sixteen-year-old Seeker's older brother is publicly humiliated and--with no explanation--exiled from the Nomana, a revered order of warrior monks. Seeker refuses to believe that his beloved older brother is capable of committing a betryal that would warrant such severe consequences, so he sets off alone on a journey to rescue his brother and find out at last what really happened.

Along the way he meets two other young people who are on quests of their own, and in a shocking turn of events, the three are soon caught up in a harrowing and bloody race to save the Nomana--and themselves--from destruction.

It involves warrior monks, the eponymous Noble Warriors, and the protagonist finds "a plot to destroy Anacrea, the Island on which the Noble Warriors live" according to one of the reviews, so there's your island. Lastly, the brother is mentioned in the summary.

I haven't found an "evil empire", but the second book's summary mentions that "The mighty warlord of the Orlan nation is gathering his forces and has vowed to destroy Anacrea -- and everything and everyone that crosses his path."

Ah, and according to Nicholson's online bio, he doesn't explicitly identify as an atheist, but

I still considered myself a practising Catholic as I began my university career, as a scholar at Christ’s College, Cambridge; but by the time I left all that was left was the space in me that my faith had occupied for so long. Much as I wanted to go on believing, it became clear to me that it’s we humans who make God, in our great need. God, if he existed, would have no need of humanity.