What is the SFX process for phaser beam accuracy?

Inspired by this question about hand-held phaser grips and the lovely picture posted by Tritium21, I noticed that there seems to be a very deliberate direction to the line of fire of O'Brien's handheld phaser. 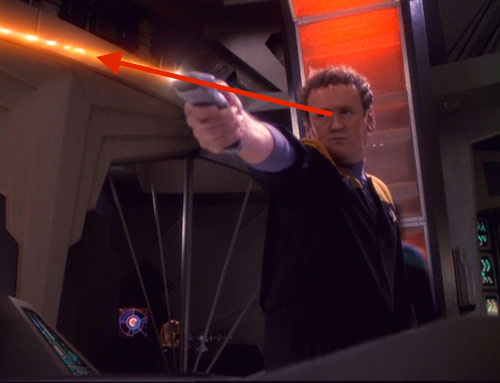 This got me wondering: do the show runners or technical advisers of Star Trek ever go on record for the special effects process for filling in phaser fire? In other words, is the line I indicated on the drawing intentional? Does Star Trek take care to enforce the consistency of phaser fire or is it just whatever looks good in the shot?

Also, continuing the line of though in the linked question, are there any in-universe explanations on the aiming mechanisms of phasers? As pointed out, obtaining a steady beam with a light weapon is very difficult with 21st century handhelds especially over the 0.5-2 second continuous bursts they frequently show in Star Trek. So is there any technobabble behind the seemingly 100% accuracy of Star Trek handheld beam weapons?

Disrupter and particle weapons are of interest to me as well, but they operate a lot more like modern day projectile weapons with no opportunity to observe an unsteady hand flailing a beam all over the place.

At least regarding the Original Series, you can find some details here on how they did the effects, and how much the results varied:

A comparatively simple special effect to accomplish during production of The Original Series was that of phaser fire; which relied upon animation. As explained by Stephen Whitfield in “The Making Of Star Trek” (Ballantine Books, 1968): “A series of drawings is prepared, each showing the beam slightly larger and longer than the previous one. These are shot, one frame at a time, and when the film is run at normal speed, it appears as though the beam were being fired.”

The first images they provide after that photograph clearly show that the angle is not quite straight in some shots. 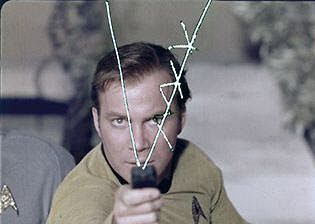 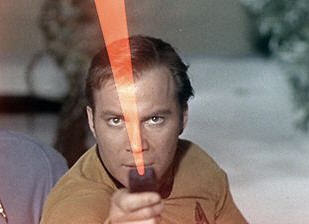 Sometimes, the beam didn't even start at the end of the pistol: 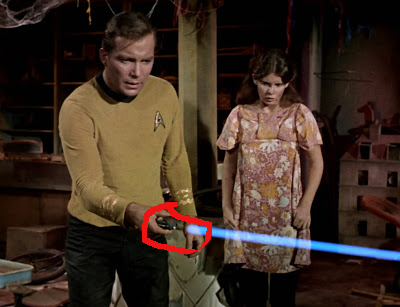 (hand drawn circle is mine)

I suspect that the technology got better with later series, particularly as they started being able to bring computers and digital image manipulation into it, but I have no data on that yet.

Not the answer you're looking for? Browse other questions tagged star-trek technology weapon phaser or ask your own question.

41
How "realistic" is the way of holding star trek phasers?

37
What is the difference between a phaser and a disruptor?
19
Couldn't you use systematic phaser fire to find a known cloaked enemy?
25
What happens to people when they are hit by a phaser beam?
18
Are Enterprise security personnel trained in combat?
58
Why aren't there any main Federation battleships in the Star Trek universe?
13
How fast does a phaser beam travel?
13
In-universe rules for extent of handheld phaser disintegration
8
Does transporting (beaming out) leave your troops vulnerable to enemy attacks?
8
Can blasters—and related hand-weapons—in the “Star Wars” universe “overload”/self-destruct similarly to the way they do in the “Star Trek” universe?
8
Do Hand Phasers And/Or Disruptors Have An Auto-Target Feature?