What is the earliest instance of Spock being called "Dr. Spock"?

As noted in the answer to the question Does Spock have a PhD?, Spock is never referred to on-screen as "Dr. Spock" in Star Trek. However, the "doctor" title has persisted amongst the general population for many decades.

Out-of-universe, what is the earliest instance of this error?

Did someone write it in a newspaper? Was it mistakenly used by an interviewer or interviewee? Perhaps it appeared erroneously in a TV Guide entry? (Note that TV Guide began in 1953, thirteen years before The Original Series.)

Dr Spock was a real person, an American pediatrician whose book Baby and Child Care, published in 1946, is one of the best-sellers of all time. This Benjamin Spock, unlike Star-Trek Spock, is usually referred to as "Dr Spock" (although the title seems to be that of a medical doctor rather than a PhD graduate).

Quoting from Wikipedia (sourced from the book The Making of Star Trek):

Roddenberry sought an alien-sounding name when he created "Spock", and did not know until later of Dr. Benjamin Spock, the pediatrician and author.

Quoting (again) from this discussion:

When Gene Roddenberry was informed that the name of his Vulcan was of a real person it was too late to change it. Star Trek and the baby-doctor both emerged into the public eye about the same time and some people who knew little of either confused the two into one.

This confusion has led to people - including some famous people - calling Star-Trek Spock "Dr Spock" by mistake. 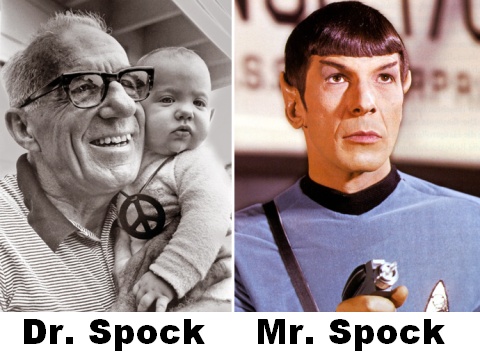 When did it start?

An article here, mainly about Dr Spock, says (emphasis mine):

Leonard Nemoy [sic] struggled his whole career with people who confused Dr. and Mr. Spock, a confusion which normally resulted in an arch of his eyebrow.

So it looks as though the confusion goes right the way back to the start of Star Trek TOS. Indeed, the Star Trek writer Leonard Weinstein once said (again, emphasis mine):

I was about seven when Alan Shepard became the first non-canine, non-chimp American astronaut in 1961 (fast becoming ancient history!). I knew nothing about science fiction, but real space exploration captured my imagination right from the start. Five years later, as NASA advanced from Mercury to Gemini, Star Trek started without me. I don't know what I was watching in September '66, but it wasn't Star Trek. I heard my junior-high pals talk about it at the lunch table, but I must not have been paying close attention, because I confused Mr. Spock with Dr. Spock and Dr. Spock with Dr. Smith from Lost in Space. And what little I'd seen of Lost in Space had not impressed me, and I hadn't even noticed Star Trek. But my friends kept talking about it, so midway through the first season, I watched Star Trek myself.

This proves that the confusion dates back to the very first season of Star Trek TOS.

Spock is called Dr Spock by Dr McCoy in Season1 Ep3 CharlieX at about 9min 17sec while Kirk Spock and McCoy discuss Charlie on the bridge. 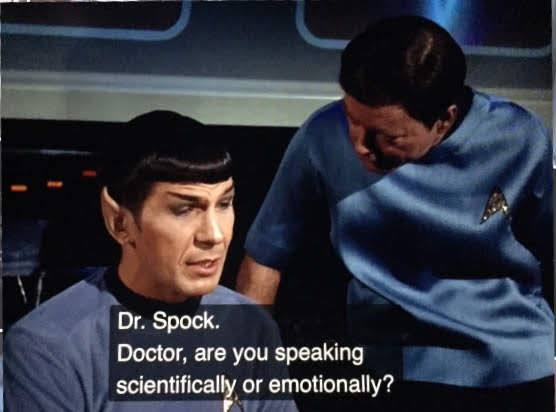 Not the answer you're looking for? Browse other questions tagged star-trek star-trek-tos names spock or ask your own question.

5
Does Spock have a PhD?
2
What is the etymology of Spock's name?

20
How does the Federation determine how to set their clocks?
2
Has Captain Kirk ever been to London?
11
What is the in-universe reason for Spock smiling in 'The Menagerie'?
8
What was the name of a Star Trek TOS "Choose Your Own Adventure" style book?
6
In The Menagerie Part 1, why is Spock limping?
7
Changing mores: Were there any viewer complaints when Dr. McCoy called Mr. Spock a "half-caste" in TOS or did the context make the term excusable?
6
Was Spock ever called a mongrel in a Star Trek TV episode or movie?
13
Has there ever been a warp / non-warp collision?