In Titan A.E. why do the Drej want to destroy humans?

I recently saw the movie again, and I got this doubt in my mind since they don't specify a reasonable reason of why the Drej want to destroy the Titan and the Human race.

The only thing I know is that they say something like the Drej are afraid of something but they never say what or why.

Is it something related to the fact that...

Cale convert Drejes into energy to activate the Titan? If this is the reason, does this make us the evil one for try to kill this race in order to use the Titan's technology?

This is discussed at some length in the film's official novelisation which seems to have been based on an earlier draft script for the film and contains various scenes not seen in the film, notably dialogue scenes involving the Drej.

In short, the research being conducted by Sam Tucker (Cale's father) came to the attention of the Drej Queen. Her spy detected that humanity was about to gain access to the same technology that they use to power their massive hive-ship. Her reaction was swift and pitiless, only they, of all the races in the galaxy, must have access to this technology. Humanity must die

The-Human-Sam-Tucker shut off the latch switches and stepped back around the shield he'd gone behind. There on the opposite side of the table sat a box which looked exactly like the one he'd pointed the accumulator at.

The Queen at the time had recognized the obvious danger.

Biobods had discovered Artifact technology. Her conclusion had been fast and decisive.

So the Earth had been destroyed just as soon as the Alahenena could reach it.

By the time the Drej arrived on the scene, Tucker Sr. had already implemented the "artifact" tech in a ship, the Titan. When the Drej were unable to destroy it, the decision was taken to acquire it and study it to see whether it could be used to make more Drej ships, hence their decision to track Cale rather than merely killing him.

Interestingly, the (licensed) Dark Horse prequel comic 'Titan A.E. Part 2' offers a slightly different interpretation; The Drej have detected an unusual energy signature emanating from Earth. They find this energy irresistible as it will allow them to breed a large number of new Drej. Unbeknownst to them, the energy isn't found in the planet but is in fact housed on an experimental starship, the Titan. 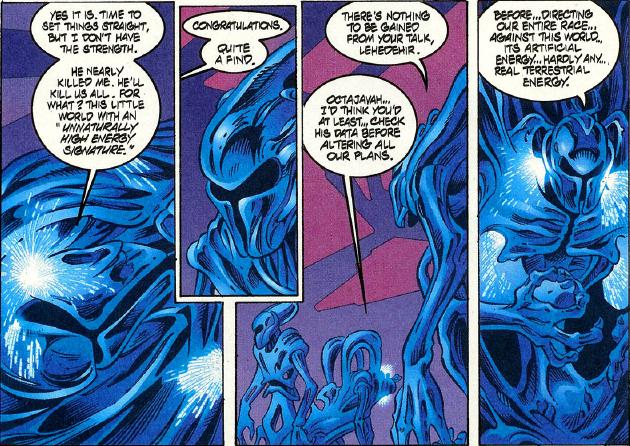 It's all there in the first scene as narrated by Sam Tucker:

Once in a great while, mankind unlocks a secret so profound that our future is altered forever. Fire, electricity, splitting the atom. At the dawn of the 31st century, we unlocked another. It had the potential to change humanity's role in the universe. We called it “The Titan Project,” and it was a testament to the limitless power of the human imagination. Perhaps that was what the Drej feared most, for it brought them down upon us without warning and without mercy.

This suggests that the Drej felt directly threatened by the Titan Project's capacity to literally rip them apart for the energy to create new planets. However, more broadly they may simply have resented the growing power and creativity of the human race and feared what might be achieved in the future.

It's explain in the beginning of the movie that the Drej fear the Titan's power. And we can see why in the last scene: the Titan need to function by absorbing energy. And the Drej are made of pure energy. Therefore they feared to be used as machine enginers by the humans to power the Titan. As it happened

The reason why they are want to destroy humans is, we are an organic species. They are hate all organic life in universe.

Not the answer you're looking for? Browse other questions tagged titan-a-e or ask your own question.

2
Where can I find the names of the vessels in Titan AE?

5
Explaining Preed's behaviour in Titan A.E
2
Where can I find the names of the vessels in Titan AE?
5
Wouldn't the Drej just destroy New Earth?