Has the "Hellblazer" Constantine ever met Lucifer?

In the 2005 "Constantine" movie the main character in the climax of the has a small tête–à–tête with the Devil- aka Lucifer Morningstar.

But in the Vertigo comic book universe, Lucifer has quit the job:

He became tired of the various stereotypes and prejudices that mortals held of him, such as the idea that he purchased and traded for souls, which were largely untrue, and that he forced mortals to commit evil acts. He had become tired of his reign over Hell, and felt it an unfair punishment that he should have to rule there forever simply because he once rebelled.

His job has been taken by the First of the Fallen, being much older that old Luc, who rules together with the Second and Third of the Fallen (until he realized that he is much more powerful than them) and he, not Morningstar is usually the main opponent of John Constantine. 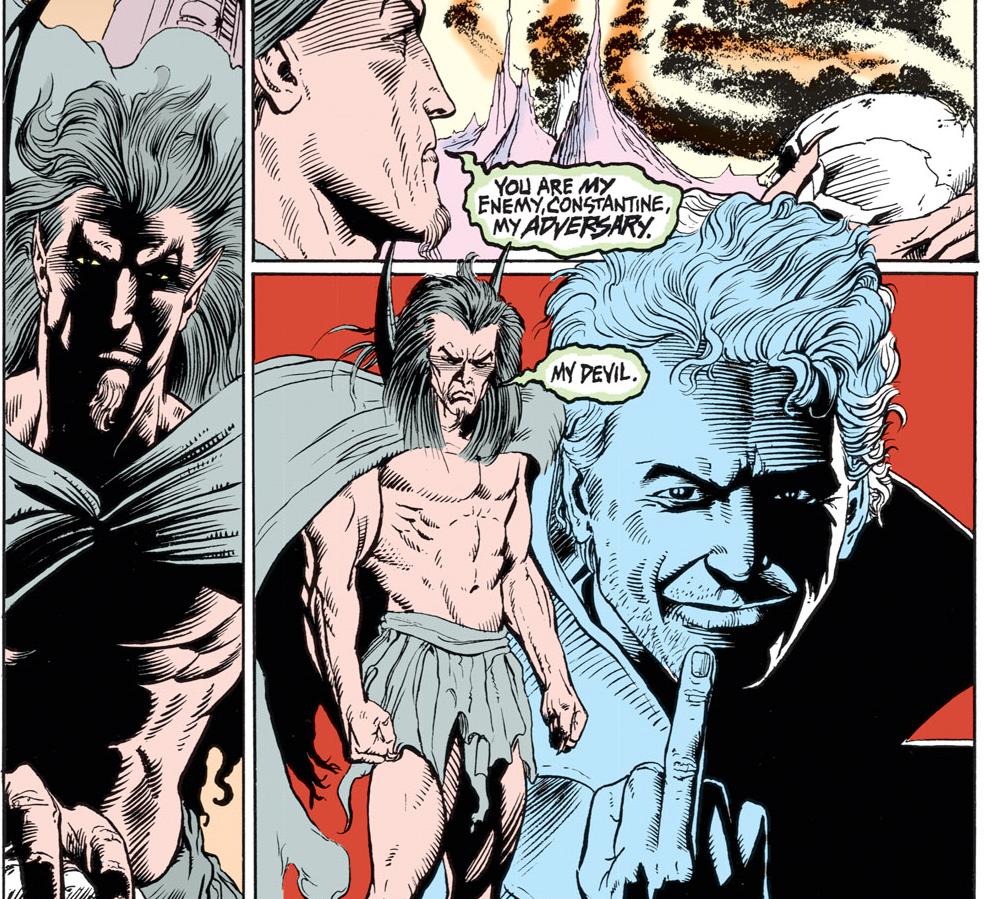 So has Constantine ever met the original Devil?

Constantine also makes a small cameo in Vertigo's Lucifer. In issue No. 5 he is seen drinking at Lucifer Morningstar's bar Lux, among guests that seek an audience with Lucifer about the gateway to the void outside of creation. According to himself he's not there to propose a trade with Lucifer, only to take "a quick look at the field". Lucifer Morningstar makes a return cameo in Hellblazer No. 192. Lucifer writer Mike Carey wrote Hellblazer between issues 175–215.

In the comics, I cannot be sure. I haven't read all of the Constantine/Hellblazer or Sandman comics. However, I do know that besides the aforementioned film, Lucifer Morningstar and John Constantine met in the Arrowverse's "Crisis on Infinite Earths" crossover, specifically part 3. In it, after

the death and resurrection of Oliver Queen,

John Constantine, John Diggle, and Mia Queen travel to Earth-666 (get it?) in order to meet Lucifer. John and Lucifer appear to have had a history, although Lucifer intentionally pronounces Constantine incorrectly. Morningstar provides the trio with a card that gives them access to Purgatory in order to retrieve

Not the answer you're looking for? Browse other questions tagged dc vertigo-comics constantine-2005 constantine hellblazer or ask your own question.

22
Why did Constantine take the amulet from the priest?
6
What happened to the archangel Gabriel in DC Vertigo after his unfortunate encounter with John Constantine (hellblazer)?
12
How exactly does the world-hell transition work in Constantine?
13
In the movie Constantine how did Constantine stay alive?
6
What has happened to Chantinelle "Ellie" after she got imprisoned by First of the Fallen?
5
Different ending(s) to Constantine the movie?
7
Is the Vertigo (especially post-"Lucifer") continuity now completely separated from DC comics?
8
What is the out-of-universe reason Lucifer Morningstar's new bar called "Ex Lux"?
8
In Constantine, what were the ring-like items Isabel threw?