Looking for a science fiction/fantasy game from my youth

I remember playing this game in my youth, so sometimes in the late 90s or possibly early 2000s. The game had both Sci-fi and fantasy mixed up together. I think that the main character was called tom or Tommy or possibly Joe. (not quite sure there)

The setting was on a different planet and I remember that there were some aliens you could recruit in your party.

Cant remember the game or if it had a book attached to it. My kid is about the age I was back then and I would love for him to try this marvel of the last century for himself coz it seems that the saying "apple doesn't fall far from the tree" is true in this case. We like the same games and we both have an uncanny way of finding games we like.

EDIT: As Richard kindly pointed out I forgot something important. The game was for PC and it was a RPG game.

So the question is what is the name of the game? and Does the game have a "world setting" like Dragon lance, Forgotten realm or is it a standalone?

It's hard know for sure, but it might be Albion. I vaguely remember playing the demo of this game back in the 90's (it was released in 1995), but never heard anything about it after that. The main character's name is Tom, who crash lands on an alien planet and can recruit party members (including aliens) to adventure with. 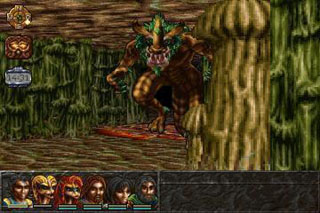 3
Looking for the name of a sci-fi/fantasy video game?
10
Looking for a fantasy trilogy from the early 2000s
10
Looking for a book where the cast is actually in the fantasy game they are playing
5
Searching for video game like Xevious but with more interesting bosses
5
90s fantasy strategy PC game - wizards, warriors and bards
4
Looking for a children's scifi/mystery/horror book about a boy who becomes addicted to an arcade game
3
Game identification: flying shooter on PC from early 2000s
5
Early 2000s sci-fi game which begins with a castle being attacked and forcing the player underground; it had jet packs and futuristic weapons