Did the two ever meet and speak about their respective works? It's surprisingly hard to find information on this through the usual channels (meaning Google).

They met at least once, at a Star Wars convention in 1987.

There's a review of Trek Nation, a documentary about Eugene "Rod" Roddenberry, which includes this photograph of Lucas and Roddenberry shaking hands: 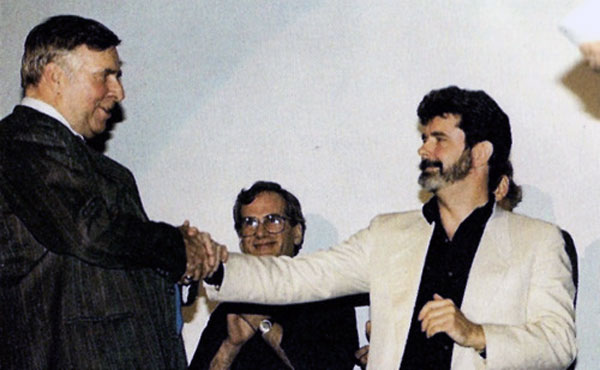 It doesn't say what they talked about, or go into any detail about the meeting.

The story goes that you got the only picture taken of Roddenberry and George Lucas together. Is that true? Even if it's not, there's got to be a good story there.

The photo was taken at the first Star Wars 10th anniversary convention in L.A. that was put on by Creation. At the end, George came out to speak to the crowd and was surprised by Gene, who came out to congratulate him on the 10th anniversary. There were on stage for a short time and it was a historic moment. There were hundreds of people in the audience, so I’m sure someone snapped a photo of them. Most never saw the light of publication, though. It was pretty exciting to see my two heroes on stage together, something I thought I’d never see. I'm not sure if they ever saw each other again. It was quite a surprise when Gene walked out on stage and George, I think, was at a loss for words. He wasn't expecting that. It was one of those very cool moments.

There are murmurs on the Internet that Lucas said something to the effect of "I write Star Wars scripts in the afternoon while watching local Star Trek reruns", but I haven't been able to find an exact quote or proper confirmation. However, I did find a DVD for sale which claims to capture the meeting on film.

I also found a Lucas fansite which has a few more blurry photos from the event. (That would put lie to the "only known photo" part, but corrobates the other accounts.)

The interview with George Lucas reveals that he attended Star Trek conventions in the 1970s and his admiration for Gene Roddenberry as an artist. [...] Both dealt with limited resources, and the simpatico Lucas feels with Roddenberry on that matter is an intriguing revelation.

I haven't seen the documentary, so I don't know how much detail the interview goes into (or whether Lucas explicitly mentions meeting Roddenberry at a convention) – but it's plausible that they did.