Why were DS9's uniforms different?

For DS9, they switched to the much less pajamic uniform style.

Those uniforms were used in Voyager.

Eventually, everyone converts to this:

Now, in the first DS9 episode, Sisko, O'Brien, Dax and Bashir are all shown in the TNG style uniform before they settle on DS9 and have chance to change uniforms.

This is confounded since they then go with the new uniforms for Voyager as well as the Enterprise-D in Star Trek: Generations, which seems to be as odds with the DS9/TNG schism.

So what exactly was supposed to be going on in-universe at the time with the uniforms?

Allowance for informal, comfortable clothing while on duty.

I believe answer has to do with formality versus informality and comfort. 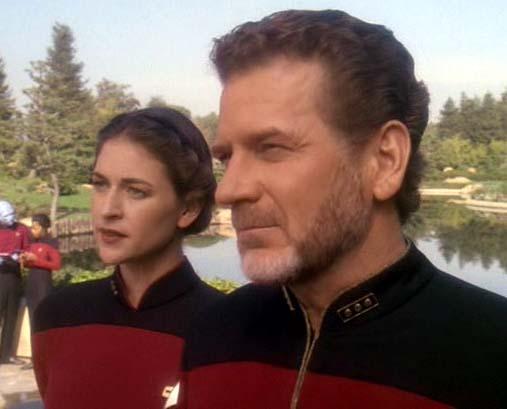 We have already ruled out that the DS9-style jumpsuits were intended for use exclusively on space stations, given that they are used on the Enterprise-D in Generations and on Voyager. Since officers based at Starfleet Command are still wearing the older uniforms in the fourth season of DS9, and since Sisko made the point of changing into them for his visit to Starfleet Command, the suggestion is that the TNG-era uniforms are more formal.

In turn, this suggests that officers on starships and Starfleet installations were offered the jumpsuit as an alternative to the TNG-era uniforms, perhaps for comfort while working. Consistent with this, the "Homefront" example shows that the jumpsuits might not be deemed as suitable for official business as the TNG-era uniforms.

So in the years leading up to the fleet-wide shift to the grey-topped First Contact-period uniforms, the TNG and the DS9-style uniforms were in use concurrently, with context dictating which was more appropriate.

This screenshot from the Enterprise bridge in Generations shows both in use at the same time:

Most telling is that Riker begins the film in a TNG-style uniform, but when things begin to heat up, he changes into a DS9 jumpsuit. Comfort is important when you're about the crash the saucer section into a planet!

To put into modern context, even the Navies around the world have multiple "duty" uniforms and some are more formal than other or flat out dress uniforms.

For instance, when on duty at headquarters battalion administration and security will be in dress uniforms while general troops are wearing camoflauge utilities or blouse & slacks. This extends even to on ship where Utilities generally become the "formal" and coveralls become the "utilities".

Then there is such a thing as "Uniform of the Day" where the CO has near-absolute jurisdiction over what his command wears at any given time so long as it is not in violation of the established clothing code.

I doubt there was that much though put into it in Star Trek, but it doesn't seem too odd in context with modern times. As far as the grey shoulder uniform goes, it was likely a more subtle way of making every one similar in war time (Dominion) while still keeping the occupational specialty segregation.

Non-Canon answer (its based on evidence from Star Trek Online)

In the 2410s, Starfleet had a policy where captains and other commanding officers had discretion over their personal and crew uniforms, departing from a standard. The new "Oddysey" style uniform was adopted for all general staff and those crews who had not opted for a custom uniform

TO: All Starship and Station Commanders

This memorandum is to inform you of updates to the Starfleet Uniform Code Subsection 1 effective Stardate 87003.

As the political realities throughout Federation space continue to shift, Starfleet must remain a force for consistency and stability. To that end, the admiralty is enacting a fleet-wide update and standardization of the Starfleet duty uniform. Starfleet has officially and totally adopted the uniform designated “Odyssey”, which has already seen initial deployment by personnel on Earth Spacedock in Sector 001 and in several fleet command starbases across the quadrant.

The Odyssey uniform design provides a solid link to Starfleet’s heritage while establishing a bold direction for its future. Attached to this message are replicator patterns for the Odyssey uniform. We have authorized all starship and station commanders to begin replication and distribution of this uniform among their crews effective immediately. Please also see the attached uniform specifications on appropriate accessories, coloration and wear.

NOTE: Subsection 2, Paragraph 1 of the Starfleet Uniform Code remains in effect; Starship captains continue to have discretion as to their personal uniform and the uniforms of their bridge crew.

It is possible that this policy existed in a similar fashion back in the DS9 Era, and Sisko was given leeway to select station uniforms to his liking and to fit the needs of the base. In this case, Terok Nor was an inustrial mining platform that had been stripped and sabotaged by the Cardassians. There was a LOT of dirty grubby work to do. To this end he may have selected the workman's jumpsuit style uniform out of prudence to the work needing doing.

When Starfleet released the grey First Contact style uniform later on, Sisko likely decided that the need for the rugged jumpsuit variation had passed, and opted for the more militarized look to meet the needs of the growing conflict with the Dominion.

Other evidence to show this trend was the moderate continued use of the skintight uniform on TNG well into the general use of the Starfleet Duty Uniform used in the latter half of TNG, along with various scientific outposts using slightly modified uniforms through all series. Seen here for training, excursion, flight suit, B'elanna Torres's work jacket, as well as personal modifications such as Worf's Sash, Bajoran Earrings, Maternity alterations, Combat uniforms, MACO gear, etc.

Out of universe answer DS9 was set in a grittier shades of gray setting, so the black uniform symbolized the darker theme of the show.

My experience is there is a duty uniform i.e. BDU's, which is normally worn. Depending on your specific job you could wear blues; blue pants, with a light blue shirt, a tie is optional. I the medical field the wear of scrubs was allowed. The unit commander could designate which uniform was to be worn normally, and could specify that a certain uniform to be worn on a specific day. Blues day, or BDU day.

The DS9 uniforms seen in the first five seasons were originally conceived to be exclusive for space station crew members. You can see that reflected on the show itself when Starfleet guest stars from either ships or HQ only wore TNG style uniforms, and when Sisko visited HQ he would wear TNG uniform.

For various production reasons, it was decided that GENERATIONS and VOYAGER would feature DS9 uniforms, despite conflicting with the original premise of those uniforms. Apparently that decision was made because the DS9 costumes were much more comfortable for actors to wear than the more cumbersome TNG costumes. If production wanted to more consistent about the depiction of TNG/DS9 uniforms, they would have had GENERATIONS and VOYAGER strictly wear the TNG uniforms while DS9 would keep theirs.

Not the answer you're looking for? Browse other questions tagged star-trek star-trek-tng star-trek-ds9 star-trek-uniforms or ask your own question.

16
Who is this Starfleet crewman and why is he wearing an old uniform?

26
Why didn't Star Trek: The Next Generation change their uniforms when Deep Space 9 came out?
7
What was the in-universe explanation for the differing uniforms in season 3 of TNG?
7
Replicated Uniforms
6
Why do the trill need a symbiont if the Guardians can transfer memories?
2
Was there ever a time that the crew of the Enterprise-E would have worn TNG S1-7 / DS9 / Generations-style uniforms?
21
Has a Star Trek doctor ever been randomly injured in an attack?
26
Why didn't Voyager make a cloaking device?
4
Are there really script notes calling Chief O'Brien a Warrant Officer?
5
Defiant vessel in TOS prequel
18
Are there any species in Star Trek whose dietary requirements are different enough, that they couldn't survive on e.g. Human or Vulcan food?