Why there is so little technological progress between times of Old Republic and Star Wars?

It is quite characteristic for fantasy worlds to have little technological progress because magic (since magic works better than technology, we don't need to develop it) and/or longevity of one of the dominant species (longevity means slow reproduction rate which leads to slow "I want to do things different than my parents" type of progress).

In SF technological stagnation is usually explained by some great catastrophe that created new Dark Ages (i.e. Canticle for Leibovitz) or we have something that actively prevents innovation (like risk of Chaos possession actively discourages too bold innovations in Wh40k universe or risk of re-creating Thinking Machines in Dune).

In the Star Wars we do see progress between episodes with the Death Star as a best example (there are other mentioned in linked question: change to space fighters, upgrade to the bionical replaced limbs - compare Anakin's and Luke's hand), but when you look back and notice that technology from the Old Republic (i.e. in the KoTOR games) is not that much different than one in the movies, yet there are separated by few thousand years. As someone that is not very knowledgeable in the SW universe outside of the basic movies, could someone tell me, why there is so little progress? Was there a regress in-between or simply people gave up after reaching some sort of peak (like it happened towards the end of the Roman Empire)?

I had this same question and would hold that you are absolutely correct that there's a lack of technological progress.

While there may have been some gains, if we compare the relative magnitude of technological progress on Earth over the last 1,000 years to that in the Star Wars galaxy, it's stifling.

Having said that, it makes some sense. While there are debates about the shape of the curve which best describes technological change over time, no one thinks that it's linear.

Most academics agree that it's increasing at a decreasing rate, with periodic spikes of innovation (like the Renaissance and the rise of microcomputers) which get smaller and more frequent at each occurrence. 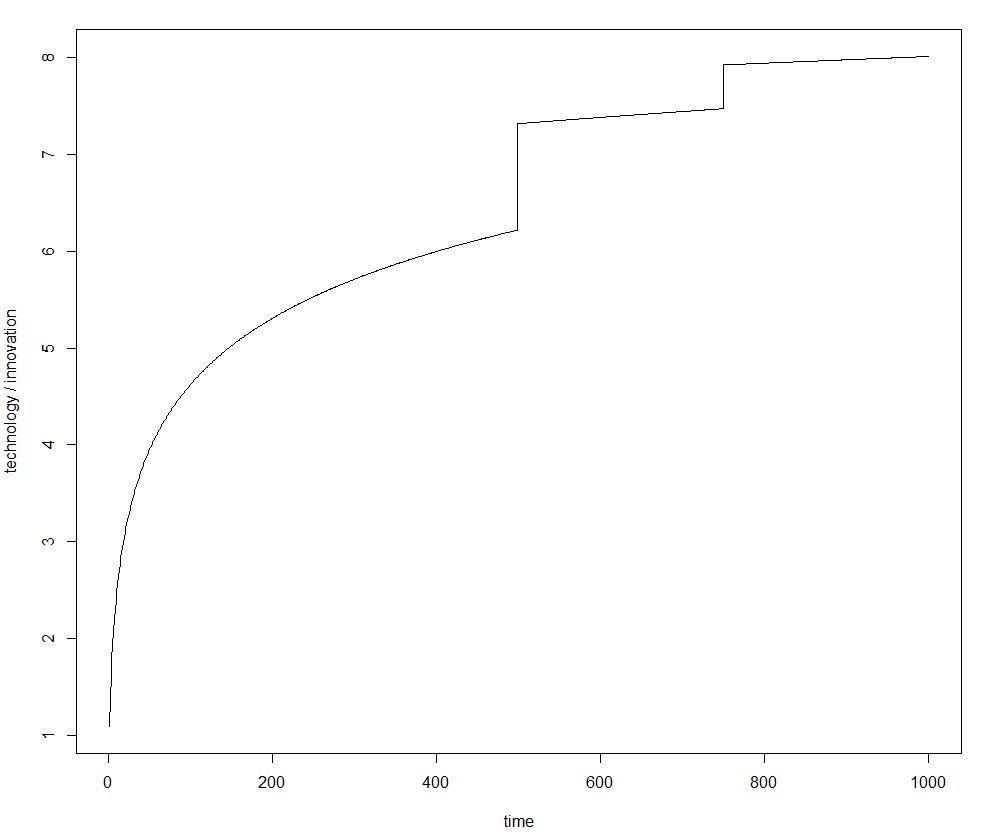 Since the Star Wars galaxy both

relatively modest innovation and slow, incremental technological improvements are to be expected. It would be like observing them at the beginning and end of the last segment of the trend line above.

There is no evidence that technological progress hasn't occurred.

Would A Death Star made during TOR be the same size as the death star and would it be able to do the same amount of damage? In 4,000 years a lot of technology could have been miniaturized smaller transistors, capacitors, generators etc.

Just because we don't see new tech doesn't mean that there isn't old tech doing brand new things, as a suit of plate armor is pretty old tech but a set of titanium plate armor, well that might take some doing.

Basically speaking, it's due to the general devastation of the New Sith Wars, which were a series of conflicts stretched out over the better part of a millennium (the Draggulch period, roughly 2000-1000 years before A New Hope, though the major fighting was 1500-1100 BBY) and involved not just the Republic and Sith but a large number of other combatants, most of them opportunistically supporting both sides at various times.

As a result of the wars, the Republic was pretty well crippled - communications outside the Core were cut off, the government nearly collapsed, there were plagues, the whole nine yards. The Republic as a whole was basically totally reliant on the Jedi, and they were still losing. (Well, sort of. The Sith weren't very unified, as is their wont, so they had a lot of internecine squabbling between warlords. That didn't really help the Republic much since they tended to get caught in the middle no matter what.)

Basically - there was a lot of technology lost, not a lot developed, what was developed tended to be limited in extent rather than galaxy-wide, and afterwards there was a prolonged reconstruction period where resources were mostly going towards rebuilding what was left of the Republic.

(For the curious - most of the information on this time is established in the comics, especially the Knight Errant miniseries. The Darth Bane books also touch on it; Bane took over the Sith right at the end of this period, as the Republic began to recover after the final battles.)

Not the answer you're looking for? Browse other questions tagged star-wars technology star-wars-legends or ask your own question.

24
Has technological progress stopped or reached a peak in the Star Wars universe?
38
Is the Star Wars galaxy (or the Force) dying?

9
What happened to the Sith Emperor from Star Wars: The Old Republic?
24
Has technological progress stopped or reached a peak in the Star Wars universe?
5
The Clone Wars mentions of Old Republic
6
Is there a name for era(s) between Old Republic in KOTOR and Clone Wars?
13
Why are most holograms blue in Star Wars?
12
Why do some Jedi have red lightsabers in Star Wars: Republic?
6
Why fifteen stars on the 'Star Wars' New Republic Insignia?
5
Old Star Wars Legends book set after ROTJ