Book where man is abducted by crab-people aliens

It's a sci fi I read in the early 90s about a man who gets abducted by aliens (crab-people) and is kept in a room where they watch him. They put him in with another alien species female that looks pretty much human. She ends up getting pregnant, has a baby, and the baby dies. He finds a way to escape by going through the floor. He takes crab person hostage and escapes back to Earth, I think. Then it starts to get fuzzy. Pretty sure it was a series. Paperback in early 90s but came from retirement home book sale.

"Barton couldn't believe it, even while it was happening. One moment he was alive and well on Earth, then in a flash he found himself hurtling through millions of miles of uncharted space-- prisoner of an advanced alien race whose humanitarian plan involves the surgical transformation on all mankind into misshapen parodies of themselves."

...he curled up in the middle of the floor, well away from the latrine and feeding areas, and began willing himself as close to death as he might possibly get back from, and perhaps a little further. Besides hallucination and self-hypnosis and faking, he threw in considerably more true death wish than he would have done if he were still capable of giving a real damn. He knew what he was doing, but it didn't frighten him. The floor would not allow passage of a living organism; therefore Barton had to be effectively dead. That was how he had figured it, what he was betting on. There was no other chance for Barton, none at all.

The sensation of interpenetrating the floor was disturbing beyond anything he could have imagined; he hadn't expected to be able to feel anything. But bis will held; he gave no betraying heartbeat. Some ghost at the back of his mind tried to guess how many pounds of his own excrement he was finally following, but the estimate was impossible. He didn't know bow many years it had been, let alone his average excretion.

The sudden drop through the air and subsequent impact jarred him. He saw through slit-tight eyelids that he was on the floor of a corridor. At least he had lucked out and missed the plumbing. Only one robed lobster was in sight. It approached, bent over him and reached ... 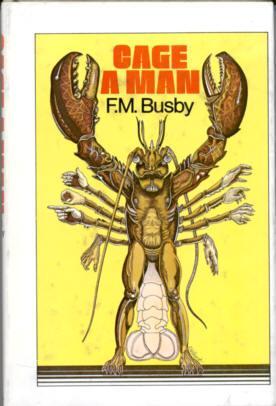 14
Story of an ex-dictator time-traveling into the past who's hunted down b/c he's radioactive
18
60s-70s science-fiction novel about interstellar agent with artificial hand
10
Anime about a cop with a robot partner and a rampaging tank
27
Novel: Woman lives her entire life, then finds out it was just practice
21
70's/80's story about a high ranking prisoner of war on a prison planet
8
Horror novel about an immortal snake-woman, feeds on blood and can take over human bodies
5
Book(s): Space Opera - Young Man becomes Captain, Homemade AI becomes Real Girl
18
1980s novel about portal to alternate dimension with energy beings, sacrifice of sentient natives, computer leech