Why did Cloud City have the huge chutes leading into open air?

Towards the end of "The Empire Strikes Back", Luke escapes from Darth Vader by jumping down a chute... which opens up into open air, and leaves him dangling on a mast...

Why does Cloud City have these death traps in the first place?

According to the film's junior novelisation, the big tube is an exhaust pipe. Luke thinks that the the smaller sub-tubes are likely there to carry loose waste away from the reactor core:

Luke sailed into the exhaust pipe, a metal-lined tubular tunnel that twisted down and away from the reactor shaft. The pipe’s walls were smooth, sending Luke on an uncontrolled slide until he entered what seemed to be a dip in the pipe, and slowed to a stop. But before he could plan his next move, a trap-door dropped open beneath him, plunging him down another pipe.

Luke’s mind raced, trying to figure out where the second pipe would carry him. As the pipe twisted into an almost vertical slope, he guessed the pipes were designed to expel stray matter from the reactor shaft. He extended his limbs in an attempt to slow his descent, but the effort was too much for his drained, battered body. He continued to slide.

The official novelisation backs this up, describing them as a large exhaust pipe and a smaller exhaust pipe (but without going into further detail):

The Dark Lord watched until he saw the youth’s body sucked into a large exhaust pipe in the side of the reactor shaft. When Luke vanished, Vader quickly turned and hurried off the platform.

Luke sped through the exhaust shaft trying to grab the sides to slow his fall. But the smooth, shiny sides of the pipe had no hand-holes or ridges for Luke to grasp.

Luke could no longer slow his inexorable slide out the exhaust pipe. He slid the final few centimeters and then dropped through the cloudy atmosphere, his body spinning and his arms flailing to grip on to something solid.

This is further backed up by this official storyboard slide, clearly labelled as INT. [e.g. Interior shot] -EXHAUST PIPE 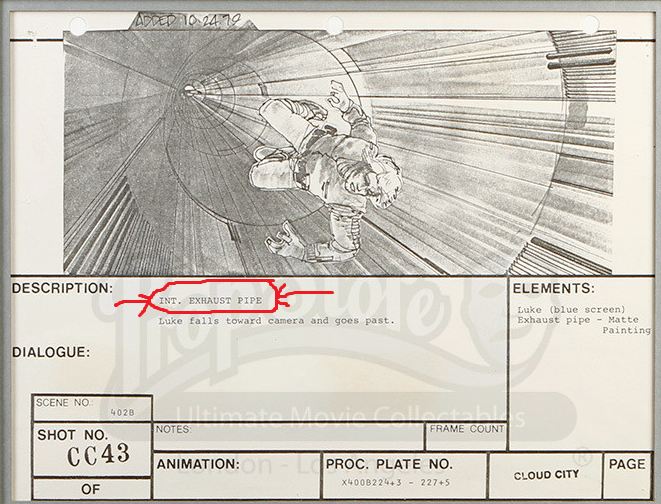 It also marries up nicely with the film script:

Suddenly Luke is sucked into an exhaust pipe in the side of the shaft. When Vader sees this, he turns and hurries off the platform.

3
What were the shafts intended for in Star Wars: The Empire Strikes Back?

62
Did Luke accomplish anything by going to Cloud City?
42
Is that Luke's hand falling down at the end of The Empire Strikes Back?
1
How did Luke get his lightsaber back after A New Hope?
62
What was the deal Lando made with Darth Vader?
6
Where was Leia when Han was being tortured?
22
Why didn't Darth Vader follow the Millennium Falcon?
11
Prior to Cloud City, did Vader know that Han and Leia were “friends” of Luke?
39
Why did Lando give up his role as Administrator of Cloud City just to side with Leia, Chewie and the Rebellion?
13
Did Luke lose his X-Wing on Cloud City?