At the 1:04:38 mark of Star Wars VI: "Return of The Jedi" Darth Vader and the Emperor just finished a conversation. The Emperor sends Darth Vader off. He then turns and walks over to two guys, who bow to him, and they begin speaking.

They clearly are not guards. I was surprised to see them in the Emperor's court as at this point because of his dominance, it's usually just him, Vader, and members of his guard or his forces.

Who are these two people? What purpose do they serve?

The script identifies them as "Council members"

EMPEROR: It is of no concern. Soon the Rebellion will be crushed and young Skywalker will be one of us! Your work here is finished, my friend. Go out to the command ship and await my orders.

Vader bows, then turns and exits the throne room as the Emperor walks toward the waiting council members.

They don't appear in the official novelisation, but there is a brief mention in the junior novel of "imperial dignitaries":

Vader had been informed that a fleet of Rebel ships had assembled in the Sullust system, and suspected the Emperor wished to do something about it. Ignoring the Imperial dignitaries, Vader arrived before the Emperor and said, “What is thy bidding, my Master?”

Moving down the canon scale, they were named in a trading card pack as Sim Aloo and Janus Greejatus, both part of the Empire's Ruling Council, a...

...collective body of bureaucrats that constituted the uppermost tier of the Galactic Empire.

Even those who should have known better tended to dismiss Dangor, Greejatus, and Pestage as sycophants, when in fact members of the Ruling Council oversaw the everyday affairs of the Empire and wielded wide-ranging and sometimes menacing powers. Even the Empire’s twenty Moffs were obligated to answer to the Imperial cadre.

These are two of the Emperor's advisors...

... high-ranking bureaucrats in the Galactic Empire. Some of them were part of the Imperial Ruling Council and, as such, they assisted Emperor Palpatine in running the Empire.

Specifically, the two shown are Janus Greejatus and Sim Aloo.

The Emperor probably wanted them close to plan wiping out the Rebellion politically after watching them wiped out militarily.

These characters have variously been described as Imperial "council members", Imperial "courtiers", and Imperial "advisors", as outlined below.

Darth Vader, standing with other members of the Imperial council, cautiously approaches his master. … Vader bows, then turns and exits the throne room as the Emperor walks toward the waiting council members.

The main corridor was filled with courtiers, all awaiting an audience with the Emperor. Vader curled his lip at them—fools, all. Pompous toadys [sic] in their velvet robes and painted faces; perfumed bishops passing notes and passing judgements among themselves—for else who cared; oily favor-merchants, bent low from the weight of jewelry still warm from a previous owner's dying flesh; easy, violent men and women, lusting to be tampered with.

The Imperial advisors were a group of several hundred high ranking political bureaucrats of the Galactic Empire.

Here's a screenshot (from the original 1983 release of the film) of them exiting the Emperor's shuttle (barely visible behind his right shoulder) after landing in the Death Star:

Here's a wide shot of them walking behind the Emperor and Lord Vader, from that same scene:

Here's a second, better-lit angle of the pair in the Emperor's throne room:

Here's an uncredited photo of the whole group from the film set: 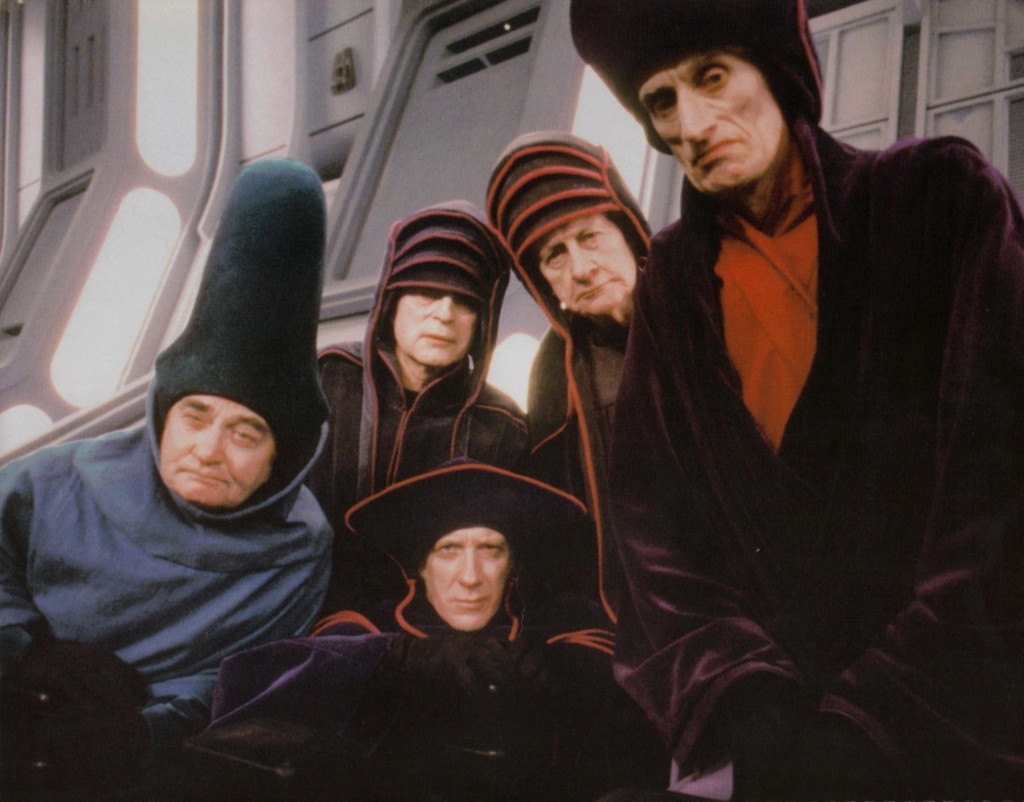 Not the answer you're looking for? Browse other questions tagged star-wars darth-sidious return-of-the-jedi or ask your own question.

0
Who are these men in purple robes?

64
Why was there a pit in the Emperor's chamber on Death Star?
16
Why did Palpatine and Vader go to the Death Star?
20
If Darth Vader discovered Luke was his son from the Emperor in the 2004 retconned version of “The Empire Strikes Back”, then how did the Emperor know?
24
How did Grand Moff Tarkin Feel About Darth Sidious?
7
Has any Imperial ever thought about why they only know of one Sith Lord?
4
How did Palpatine die in the Death Star?
33
Why was Vader accompanied by the Imperial Royal Guard on Mustafar?
49
Is there an in-universe explanation given to the senior Imperial Navy Officers as to why Darth Vader serves Emperor Palpatine?
4
Who designed the Emperor's chair from "Return of the Jedi"?