Ask Question
Asked 4 years, 8 months ago
Active 4 years, 7 months ago
Viewed 251 times
7
This question already has an answer here:
A novel where a woman from “future” of 1999 speaks leet-speak (1 answer)
Closed 3 years ago.

In the early nineties, I was reading a science fiction series that was written by two authors. The series was not complete at the time, but there were probably like four to six books in the series.

I don't remember much about the book except for a few peculiarities. At the beginning of the series, it is clear that one author is attempting to introduce computer-based slang for the characters. I think one character actually says "shove that up your disk drive", or something to that effect. I suspect that the other author wrote the second book, because this was completely dropped, and then reintroduced in later books. Even as a young person, this produced quite a jarring effect.

The only other thing I can remember about the series is that there was some kind of female insectoid creature. At one point, she loses a limb, but isn't too worried because she can grow it back.

Perhaps that is too little to go on, but I figured I'd try.

The books follow nineteenth century explorer Clive Folliot as he travels through a multilayered dungeon world attempting to find his twin brother Neville. Along the way, he forms a group of similarly lost creatures and persons, and must battle the pawns and agents of the Dungeon's mysterious alien masters.

One of the group Clive assembles is a psychic, matronly spider-being named 'Shriek'. There was also the human woman 'User Annie' from Clive's future, who indeed, spoke the computer patois. 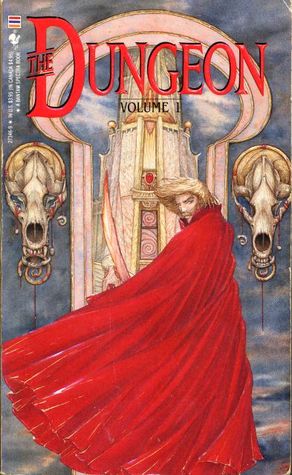 14
A novel where a woman from “future” of 1999 speaks leet-speak
6
Novel search: A man searching for his brother in Africa starts a chase through different realities/dimensions