Very cheesy-looking fantasy movie with a girl who's unaware that she's a girl, trailer had upper-body nudity

I was reading a recent query of a Beastmaster-like movie and it suddenly reminded me of a film trailer my wife and I saw a few years ago. Only a few things stuck in my head. There's a pair of well-endowed female characters, twins, who've been raised as boys, and don't quite get why men are so interested in their chest deformities. The trailer included a fair amount of upper-body nudity (yes, that stuck out in my head) and I think the title had something like "Sorcerer" or "Witch" in it. The filming style and the aesthetic of it makes me think that it's an 80s film. The language being used in the trailer was English, but for some reason, I have this vague idea that it was actually filmed in another country, maybe Italy.

In the process of writing my question, I did a bit more research and I found the film. Sorceress is a 1982 American-Mexican sword and sorcery film produced by Roger Corman that features a pair of twins key to a prophecy who are raised in secret as boys.

To maintain his powers, the evil wizard Traigon must sacrifice his firstborn child to the god Caligara. He is married to a wife, however, who has other ideas; after giving birth to twin daughters, she flees from him, taking their daughters with her. Before she dies, she hands the girls over to a warrior named Krona, who promises to raise them both as great soldiers; this he does.

Twenty years pass, and when Traigon returns, he resumes hunting down his now-adult daughters(the Harris sisters), still intending to sacrifice them to Caligara. The twins have to enlist the help of a barbarian by the name of Erlik and a Viking named Baldar in their struggle to defeat their own father. 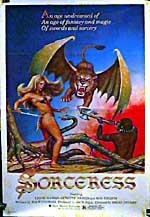 Incidentally, it has a TVTropes page.