How did Spider-Man originally control his camera effectively?

I seem to recall that Spider-Man originally typically put his camera in strategic spots near his battlefield. Previous to the advent of wireless remote controls in consumer cameras, how did Spider-Man successfully and reliably trigger the camera to get photos at the right time and in focus?

To be clear, I know that things like automatic timers existed at the time, but an automatic timer is not going to reliably get the photos he wants, especially with a limited roll of film.

active oldest votes
3
Want to improve this post? Add citations from reputable sources by editing the post. Posts with unsourced content may be edited or deleted.

Parker was able to sell his Spider-Man photos not because they were particularly good but because he had exclusives. Parker would try to move slowly enough as Spider-Man for his camera to capture something and he would sometime even pose for the camera, but with a timer it was still a crapshoot. For a while when Parker was dating Felicia Hardy (who knew he was Spider-Man), he had Hardy take photos of Spider-Man and Joe Robertson remarked how much Parker's compositions had improved.

The first time we see Peter Parker taking pictures is in Amazing Spider-Man Volume 1 #2 (released in 1963). In that, he is only interested in getting a picture of The Vulture, so he just holds up his camera and snaps a few pictures before the villain notices he is there: 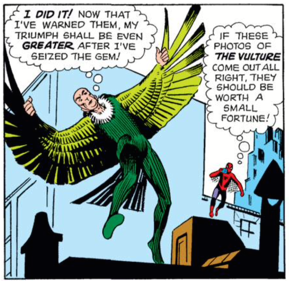 In the same issue, Peter makes a belt-holder for the camera, which he shows in Amazing Spider-Man #4. In that issue, he defeats Sandman, then realizing that he didn't get any photos of the fight, he stages one, setting his camera to automatic. 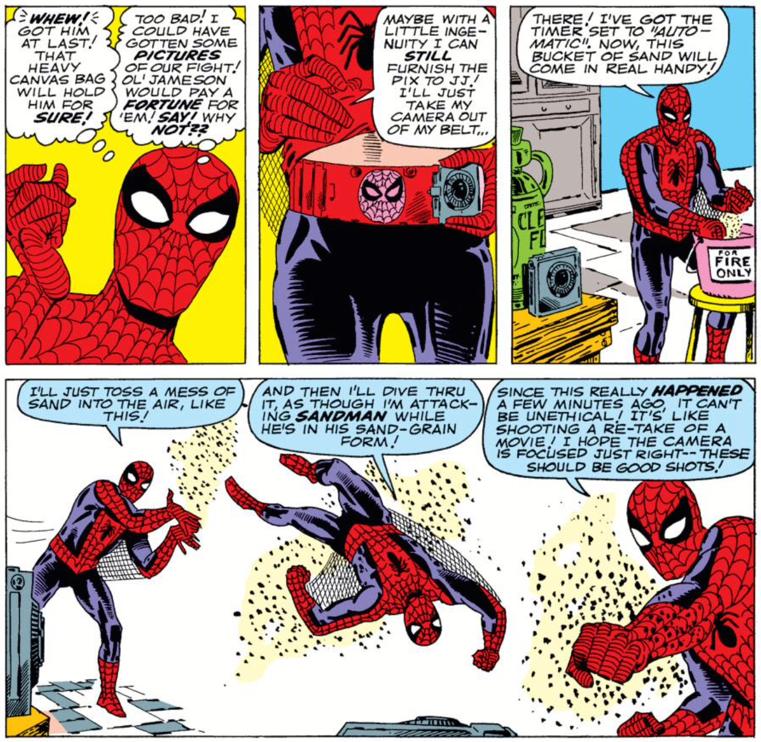 For most of his early issues, Spider-Man simply takes pictures of his enemies when they aren't looking. The first time he sets a timer for a live fight is Amazing Spider-Man #9 where he sets his camera to automatic and places it in the location where he plans to draw out Electro a few moments later. 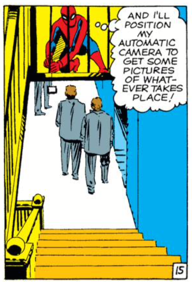 In subsequent issues, Spider-Man continues these two strategies of taking pictures when the foe's back is turned and placing his camera ahead of time in a location he thinks the fight will happen.

To address your specific concerns with the automatic camera, Spider-Man tends to use it as he does in the aforementioned comic: he fights the villain in a relatively small space, places the camera ahead of time in a location where he knows the camera will capture the whole area, and sets the camera to automatic moments before the fight actually begins, thus not excessively wasting film. (If it takes a picture once per second and he starts the fight 3 seconds later, then he'll probably get about a dozen pictures of the fight in).