I'm looking for a book series I read in middle school about a younger Merlin (I believe he may have been referred to as Emrys through the majority of the series though). It started in an unnamed village where he was adopted by a woman. Very early in the story, there was a fire and Merlin lost his eyesight. I remember on the cover there was a teenager with a bandanna around his eyes who was standing against a blue sky. He may have had a hawk of some sort and a wizard's staff. I also remember on this cover it took a jab at Harry Potter's popularity, so they may have been released at or near the same time. If someone could help me find this, I'd greatly appreciate it.

The Lost Years of Merlin

The Lost Years (originally called The Lost Years of Merlin) is a work of literature by T. A. Barron, published by Penguin Group USA. It tells the tale of the legendary wizard Merlin's youth. Though the character Merlin is world famous as an ancient wizard, this story of his lost youth is original to the author. The title applies to both the first book in the series, and also to the entire eleven-book epic.

The woman declares herself the boy's mother, and that her name is Branwen and his is Emrys. Years later, Emrys finds that he has magical powers and eventually uses them to defend Branwen against a terrorizing bully who is trying to burn her at the stake. Tragically, he accidentally sets a tree on fire which collapses on a boy whom Emrys tries to save and fails.

Emrys, in his attempt to help the boy, goes blind from the fire, but learns to see through a visual "second sight", after swearing never to use his powers again. After learning to sense well enough to be mobile, Emrys leaves Branwen at the monastery where he had been treated for his burns, and sets out to find his true home.

Here's a cover with staff and hawk against a blue sky albeit with no bandanna: 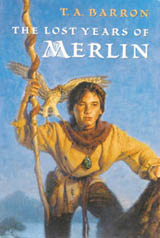 Not the answer you're looking for? Browse other questions tagged story-identification merlin or ask your own question.

5
Dragon-like creature trying to find another creature like itself

40
In Harry Potter, Who is Merlin?
1
Why didn't Morgana reveal that Merlin was a warlock to Arthur?
12
In the BBC Merlin finale, when he loses this does he also lose this?
9
Story involving young female space travelling escapee with multiple personalities
14
Science fiction book with low-tech humans eating other sentient species
2
How does Mordred know that Merlin is Emrys?
7
The Doctor as Merlin: further references?
6
Dystopian novel, main female character escapes a which factory marks girls with numbers
11
Trying to find a sci-fi book series about getting stuck in VR