The 2nd through 6th original Star Trek movies make a lot of reference to Kirk and Spock's friendship.

In particular Spock says, 'I am and always shall be your friend.'

I can't recall their friendship coming up so blatantly in the show. Sure they were convivial and seemed to enjoy their company. But did either make direct reference to being friends with the other? Did another Enterprise member ever comment on their friendship? Or did they only realize they had become friends much later?

I'm not looking for statements made for subterfuge, like when Kirk says 'This is my clearly Chinese friend' to Edith about Spock in 'City on Edge of Forever'

KIRK: Spock is my best officer, and my friend.

AMANDA: I'm glad he has such a friend. It hasn't been easy on Spock. Neither human nor Vulcan. At home nowhere except Starfleet.

McCOY: Jim, the receptacles. Spock's consciousness was in one of them.

KIRK: It was necessary.

McCOY: What are you talking about? There is no Spock to return to his body. You've killed a loyal officer, your best friend.

McCoy commenting on Kirk and Spock being friends:

McCOY: These men are friends. To force them to fight until one of them is killed —

T'PAU: I can forgive such a display only once.

KIRK: I can't let Spock die, can I, Bones? And he will if we go to Altair. I owe him my life a dozen times over. Isn't that worth a career? He's my friend.

Kirk emphasizes it again later in the episode:

KIRK: Bones. He's my first officer and my friend. I disregarded Starfleet orders to bring him here.

Spock calling both Kirk and McCoy his friends:

SPOCK: It is my right. By tradition, the male is accompanied by his closest friends.

SPOCK: He does not know. I will do what I must, T'Pau, but not with him! His blood does not burn. He is my friend!

SPOCK: I shall do neither. I have killed my captain and my friend. Energize. 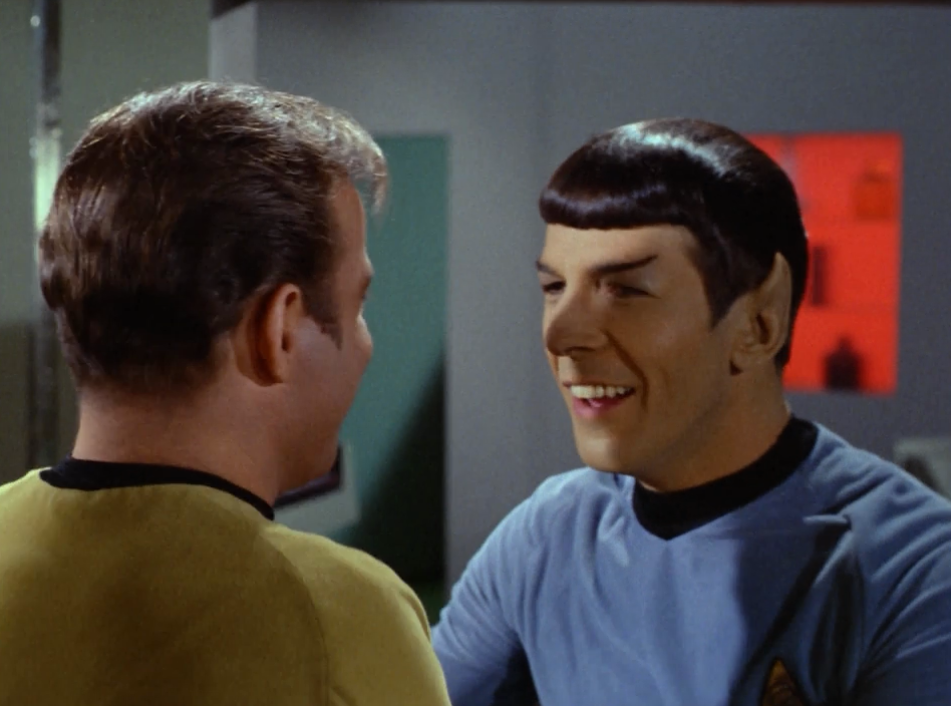 Above, you can see Spock's relief upon finding Kirk alive.

In The Naked Time when Spock is affected by the virus and basically has a bit of an emotional breakdown he tells Kirk about how he's meant to be as a Vulcan and that when he feels friendship for Kirk he is ashamed.

Thus, Spock feels a strong bond of friendship despite these emotions being culturally discouraged.

One of my favorite episodes as an example of how powerful their friendship is, would be "And the Children Shall Lead."

After the kids mind rape Kirk and hijack the ship, he is seen on the turbolift with Spock, losing his mind over fear of losing the Enterprise. While Spock maintains his monotone through most of it, you can tell by his choice of decorum throughout it all how concerned he is for his friend. First when he tries to get Kirk to calm himself he refers to him as "Captain". Then when that doesn't work he tries getting his attention by referring to him as "Kirk", his last name to maintain some sense of professional dignity.

Unfortunately when he moved to restrain Kirk, Kirk tried to strangle him at first provocation. This lead to Spock in turn emotionally going for the throat. Referring to him by his first name "Jim." in a somewhat pleading tone. This causes Kirk to realize with regret what he almost done and regain his sanity. The look on Kirk's face literally amounted to "Holy Sh*** I almost choked my friend." Later when he regains his control over his mental state and formulates a plan against the kids, he refers to Spock as "My Vulcan friend."

If that is not a clear example of their friendship I don't know what is.

54
When Did Vulcans Change from No Emotions to Buried Emotions?
0
When did Kirk and Spock check the records in Assignment Earth?
15
Is there anything more to the way others mistreat Spock?
48
What's the deal with "marshmelons"?
20
Did Edith Keeler really have to die?
7
Were there hints about a romances between Spock and Uhura in The Original Series?
11
What do Spock and Kirk eat?
4
Did Spock allow Major Rakal's death to happen?