Snotty made a joke I don't understand

I have always had a nagging question about the transporter scene in SpaceBalls.

After Skroob has been "transported", to his then asinine state, we see Snotty "try and reverse the beam".

Snotty: Hold on, sir. We'll try and reverse the beam. Could be the interlocking system.

I have highlighted the part I was not sure about. In the case of "lock lone" is there a joke or technical reference there? I don't understand that and wanted to know if I was missing something.

The following youtube video contains the scene in question. You can also just skip to the section I have quoted above.

Given that the character is a Scottish stereotype, I suspect he's saying "Loch Lomond", which features in the title and verses of the famous Scottish song The Bonnie Banks o' Loch Lomond (which many will recognize from the verse "you take the high road and I'll take the low road"):

I double checked on the blu-ray, which has an "English for the deaf and hard of hearing" subtitles option in "setup" on the menu, and the subtitles read "Lock one. Lock two. Lock three. Loch Lomond!"

Yeah, it's a reference to Loch Lomond! At least, according to the English subtitles of the DVD! 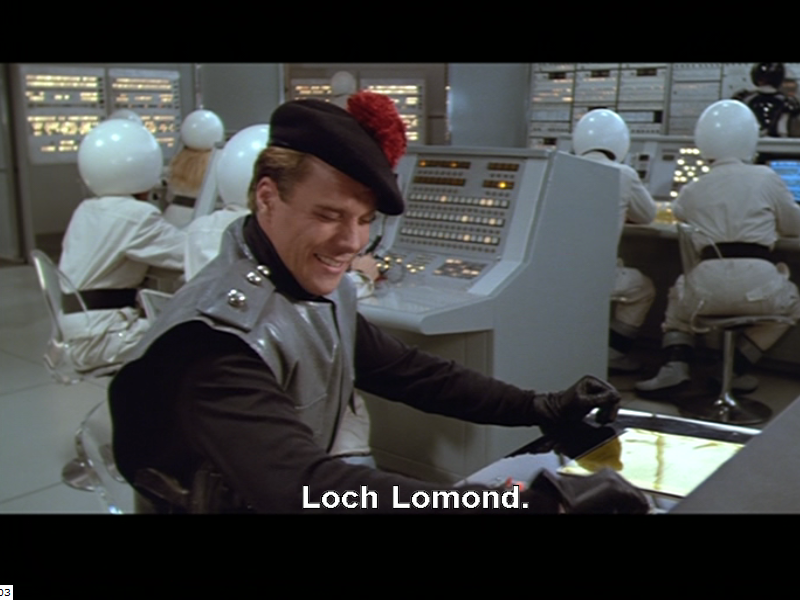 In both the German and the Italian dub of the movie - anyway - Snotty's joke is translated as:

From the name of the Scottish lake which should host Nessie (see the Italian version of the gag here).

In the original version, he's instead (as already mentioned) saying "Loch Lomond" (see the movie English script here - disclaimer: as @Richard commented, this site is far from completely reliable, but this part is identical to the English subtitles in the movie's DVD).

Side note / personal opinion on the adaptation: I suspect that this is due to the fact that Loch Ness is more famous in those countries than any other Scottish lake, thus making the joke easier to understand. Notice, however, the difference is only in the dub: the subtitles say Loch Lomond instead of Loch Ness for both versions.

He says "Loch Lomond". Loch is the Scottish word for "lake".
Loch Lomond is one such lake. It's a joke because he's Scottish, and "Loch" sounds like "Lock".

Not the answer you're looking for? Browse other questions tagged humor spaceballs or ask your own question.

24
Is Kirk’s comment about “LDS” intended to be a religious joke?
25
Are self-sealing stem bolts a Star Trek in-joke?