When I was a small child, I went to a play with a character who gave me nightmares for months.

Can anyone identify the play?

Binkley and Doinkel were blue aliens who used to spread public service messages in the late 1970s and early 1980s in Canadian cities, including the Greater Toronto Area. They appeared in advertisements and, on occasion, in person in safety "skits". 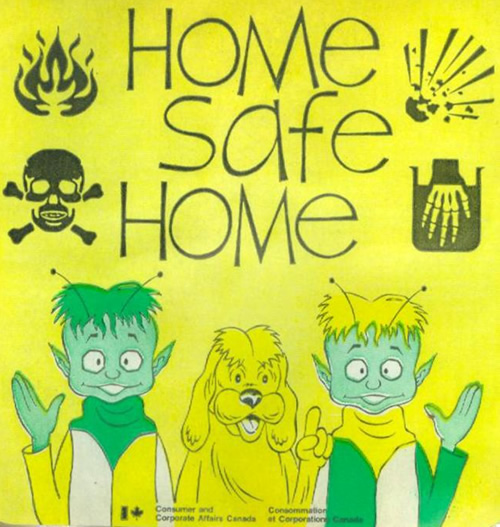 I'm not sure about "Zeeto", but it could have been the name of one of the many anti-safety "villains" they were pitted against.

Live taping / performance of Read All About It!

Read All About It! was a children's television series produced by TVO (Television Ontario) and filmed in Brampton in the Greater Toronto Area. It aired from 1979-1983. The principal antagonist was an alien named Doneedon, played by a man whose face was painted a blueish-silver. TVO described the show as a "dynamic serial with a science fiction format..."

When three kids explore a coach house held by a missing uncle, they discover far more than they bargained for when two robots, Otto and Theta, appear to tell them about a conspiracy against the town. By accident, they also discover a teleport machine that can take them to the planet Trialveron controlled by the alien tyrant, Duneedon. Against this threat, the kids decide to use the coach-house as the base for a community newspaper both to keep the building and to investigate the conspiracy. Along the way, they learn about writing and its various practical uses as they fight the alien forces that oppose them.

Although intended for children, many viewers found the show to be quite frightening at the time.

At the height of its popularity around 1982 and 1983, there were live tapings of the show and one or two special live performances in the Toronto area. It also spawned a few novels. 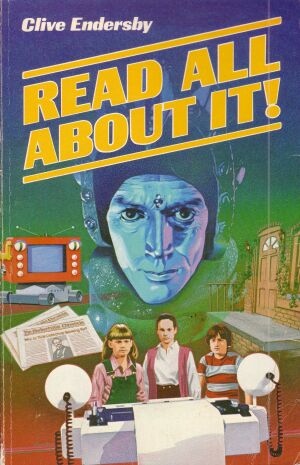 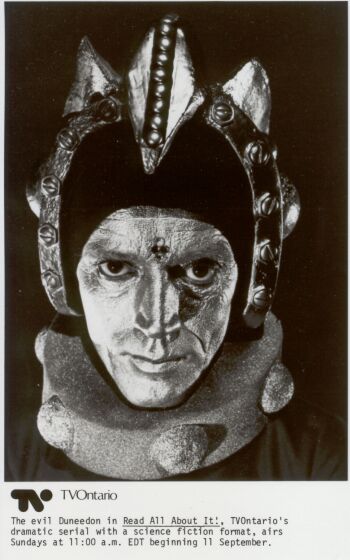 Not the answer you're looking for? Browse other questions tagged story-identification aliens theater-play or ask your own question.

9
Identify series of books about a kid and older man who fight supernatural creatures
6
Children's sci-fi book with an alien named Yacob looking for a kid with technology
9
A story including an alien hand in jar in a basement
7
Trying to find story, with an alien race who was digging tunnels to change planet's rotation and eventually orbit
6
Need help with finding a book series involving other dimensions
11
Title/author of novel(s?) about society where children learn alien languages?
4
ID a youth novel about an evolving creature that grows over time with several illustrations throughout
14
Identify a stage play about a VR experience in which participants are encouraged to simulate performing horrific activities