Does anybody know which passages of A Storm Of Swords and A Feast For Crows are depicted in these illustration covers?

This is the cover of A Storm Of Swords: 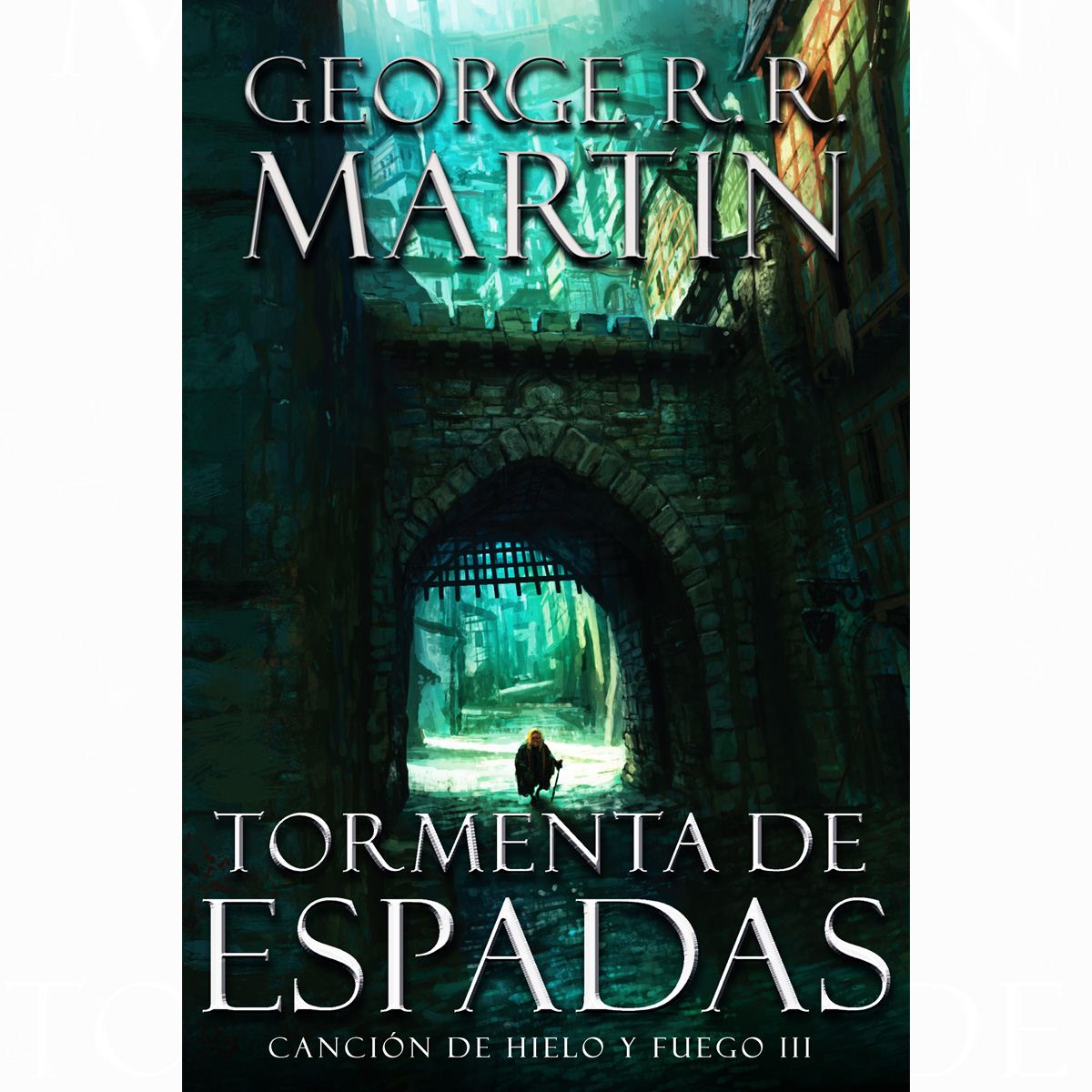 And this is the cover of A Feast For Crows 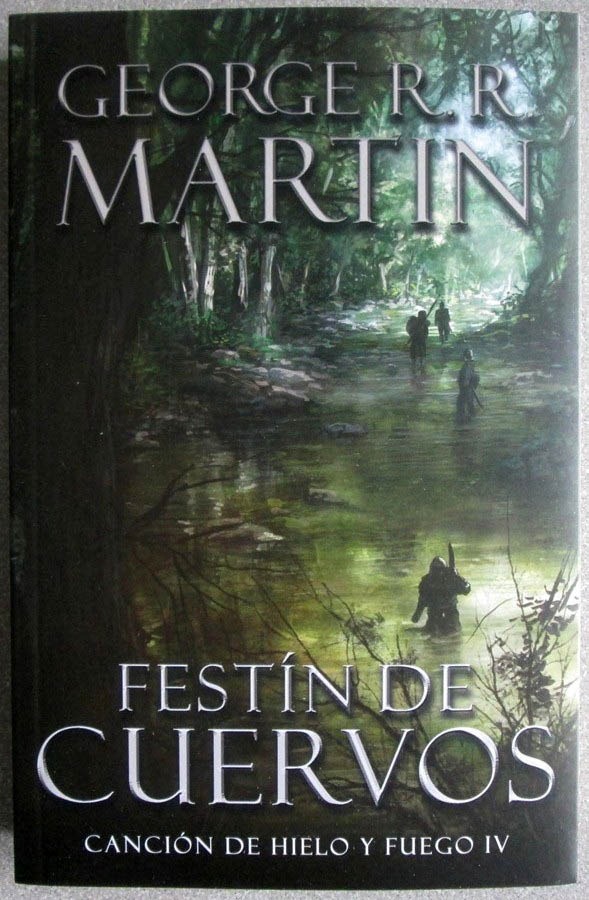 Both were published by Plaza & Janés, a spanish publishing house. I don't know the name of the illustrator/s.

Neither of the illustrations remind me of any passage I can remember from their corresponding books. Any ideas?

The images are by Marc Simonetti.

The originals can be found on Marc's DeviantArt profile, in his Game of Thrones album.

Image 1 - A Clash of Kings (French Cover)
Titled, Tyrion in King's landing; Marc says that this is a depiction of Tyrion walking around King's Landing:

This is the cover art for the second book of " a song of fire and ice" by George R.R. Martin.

I tried to depict king's landing small dirty streets, and to emphasis the contrast between Tyrion's size and the big town around him.

Image 2 - A Storm of Swords (French Cover)
Titled, Looking for Stark children, Marc says this is a depiction of Theon and Ramsay (as his hidden persona, Reek) looking for the missing Stark children (Bran and Rickon) around the woods of Winterfell:

This is the cover art for the third book of " A song of fire and ice: games of throne" by George RR Martin in its upcoming French edition.

I wanted to represent that the book's universe is both beautiful and oppressive sometimes... Here's the scene where Theon Greyjoy hunts Bran and Rickon. I hope you'll like it!

Cover of A Storm Of Swords

It shows a dwarf man walking out of a castle. I think the man is Tyrion, it may indicate

Tyrion loved his brother Jaime Lannister. But by the end of A Storm Of Swords, he comes to know that all the members of his immediate family members betrayed him. Tywin Lannister had Tyrion's wife Tysha raped. Jaime Lannister supported (out of obedience or fear) Tywin, in this deed and his sister Cersei Lannister wants him dead. Finally Tyrion knows it all and he has given up on his family.

The cover might indicate one or both of these two things.

Cover of A Feast For Crows

Brienne had received a shield from Jaime Lannister

Ser Illifer crooked a bony finger at her shield. Though its paint was cracked and peeling, the device it bore showed plain: a black bat on a field divided bendwise, silver and gold. “You bear a liar’s shield, to which you have no right. My grandfather’s grandfather helped kill the last o’ Lothston. None since has dared to show that bat, black as the deeds of them that bore it.”

The shield was the one Ser Jaime had taken from the armory at Harrenhal. Brienne had found it in the stables with her mare, along with much else; saddle and bridle, chain mail hauberk and visored greathelm, purses of gold and silver and a parchment more valuable than either. “I lost mine own shield,” she explained.

Podrick Payne had joined up with Brienne thinking Tyrion Lannister and Sansa Stark had escaped togther.

The horse reared, and the skinny boy went flying, his cloak flapping like a pair of wings. He landed in the mud and came up with dirt and dead brown grass between his teeth to find Brienne standing over him. It was the same boy, beyond a doubt. She recognized the sty. “Who are you?” she demanded.

The boy’s mouth worked soundlessly. His eyes were big as eggs. “Puh,” was all he could manage. “Puh.” His chain mail byrnie made a rattling sound when he shivered. “Puh. Puh.”

“Please?” said Brienne. “Are you saying please?” She laid the point of her sword on the apple of his throat. “Please tell me who you are, and why you’re following me.”

“Not puh-puh-please.” He stuck a finger in his mouth, and flicked away a clump of mud, spitting. “Puh-puh-Pod. My name. Puh-puh-Podrick. Puh-Payne.”

Dick Crabb agrees to guide Brienne and Podrick Payne in their journey to Crackclaw Point.

“Ten dragons are a fortune. Do you take me for a fool?”

“No, but I can take you to one.” The coin danced one way, and back the other. “Take you to the Whispers, m’lady.”

Brienne did not like the way his fingers played with that gold coin. Still . . . “Six dragons if we find my sister. Two if we only find the fool. Nothing if nothing is what we find.”

Ser Hyle Hunt secretly follows Brienne through Crackclaw Point and catches up with her at the Whispers. I say this because the fourth person is dressed up in steel and is way behind the rest.

“It was the reward I promised him for finding me the fool.”

Laughter sounded from behind them. She ripped Oathkeeper from her sheath and whirled, expecting more Bloody Mummers . . . but it was only Hyle Hunt atop the crumbling wall, his legs crossed. “If there are brothels down in hell, the wretch will thank you,” the knight called down. “Elsewise, that’s a waste of good gold.”

“I keep my promises. What are you doing here?”

“Lord Randyll bid me follow you. If by some freak’s chance you stumbled onto Sansa Stark, he told me to bring her back to Maidenpool. Have no fear, I was commanded not to harm you.”

13
What does this passage in A Feast for Crows mean?
42
Reading order of "A Song of Ice and Fire"
6
Are there any title drops of the separate titles in A Song of Ice and Fire?
27
Game of Thrones: Alternate reading order for Books 4 and 5?
18
Why do some POV characters have titles, not names, for chapters?
7
What is the in-universe meaning of the ASOAIF book titles?
11
How can Sam become a Maester in time?
3
Why does Chett survive the prologue but the other prologue POV characters do not?