Who informed the world that Brian Blessed was making laser noises during the filming of Flash Gordon?

A few years ago, I read an article in which it was revealed that while the movie Flash Gordon (1980) was being filmed, the legendary ham, Brian Blessed, kept making laser noises (i.e., saying "Pew Pew!") every time his character fired a weapon. Because the director didn't want people to see the character's enormous mouth1 moving with each blast, the battle scenes had to be refilmed.

I think this is one of the funniest things I've ever heard, and I have been trying to find the article again for over a year now, with no success.

Where did we learn that Brian Blessed can't resist saying "Pew Pew!" while filming?

1Seriously, his mouth is obscenely huge: 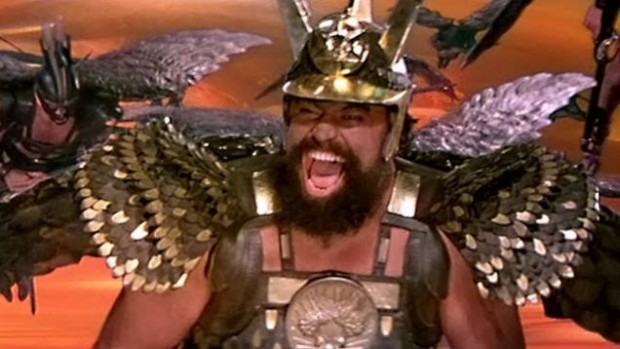 The story has been floating around the Internet for a while. A post on the rpg.net forum from 2005 says:

Word on the street is that when they were filming the Hawkman attack on War Rocket Ajax, they stopped filming to tell Brian Blessed that he didn't need to make the "pew pew" laser noises when he fired his gun. He did anyway.

However, the earliest confirmation I can find is from Brian Blessed's 2004 appearance on Stars in Their Eyes, which some kind soul has put on YouTube:

He discusses it again on a 2014 BBC 4 special, titled "Space, Time & Videotape", hosted by Brian Cox:

Not the answer you're looking for? Browse other questions tagged movie behind-the-scenes flash-gordon or ask your own question.

1
Where did the “pew pew” phrase come from?

7
Was Ming the Merciless the only Major Enemy of Flash Gordon?
8
Who exactly was Hagrid expecting in the Chamber of Secrets?
2
What's the deal with Flash Gordon and tree stump reference?
5
Does the Flash Gordon Film continue in any media after the “The End ?”
5
Is there evidence to suggest (from Going Postal) that Terry Pratchett worked at BT during the privatisation?
0
What was the story reason behind making Carnelion IV so far behind?
22
Why did Hagrid say that Snape was one of the protectors of the Philosopher's Stone?
59
Who was the student that previously brewed a potion of sufficient quality to claim the Felix Felicis?
9
Movie: during a weekend in a house, a young kid befriends someone eating anything, they find the place of a plant scientist who reached immortality