Did Morden present Londo with a fake 'Eye'?

In the episode "Signs and Portents" Londo gains posession of "the Eye", a long lost jewel (I think it was a jewel) that once belonged to the Centauri royal family. His friend and fellow noble Lord Kiro is sent to return the Eye, eventually ends up trapped on a raider (space pirate) ship whose crew intend to hold him and the eye for ransom. The raider ship is destroyed by the Shadows but afterward their stooge Morden somehow returns the eye to Londo.

I'm puzzled how the Shadows could've destroyed the ship without taking out the Eye as well, and have wondered more than once if Morden gave Londo a counterfeit- did JMS ever confirm or deny this?

The strong implication is that The Eye is indeed real. The last we hear of it, it's safely in the possession of the Centauri Republic and is on display, presumably in the Capital.

Q. What became of the Eye?

JMS. The eye is now safely back home and on display.

As to how it survived, we're left to assume that it simply survived the explosion. When the Shadows attacked, they appear to have sliced the habitat ring and engines with a cutting beam, resulting in an explosion that tore the ship into around ten sizeable parts.

I would surmise that the Shadows probably aimed for the parts of the ship where there weren't any people and got lucky that the resulting explosion didn't damage the (now heavily scorched) box and its contents. 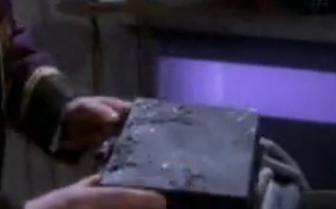 12
Does Mr. Morden cooperate with the Shadows of his own free will?
9
Why did the Vorlons work with the Minbari?
5
What did Trakis put on Londo?
3
In which Babylon 5 episode did Londo Mollari conspire with G'kar to kill Lord Refa?
5
When did Dukhat first have contact with the Vorlons?
23
How did Kosh's lessons prepare Sheridan for war with the Shadows?
8
What did the Shadows do to Mr. Morden?
1
If both the Shadow and the Vorlons knew each other motivations, why did Morden ask the Shadow's question to Kosh?
9
Did Sheridan and Delenn ever learn that Emperor Londo Mollari was controlled by the Drakh?
3
How did Delenn sense the Keeper on Londo and why didn't she do anything about it?