The book is about some campers in Montana that are kidnapped by the 'horde' aliens. Due to them underestimating the humans, they not only lose their ship, but are teleported into space when one talks to the open computer.

The humans then start gathering people tired of their treatment on earth, and veterans, and start building a moon base. When the government finds out the are rather unable to control the situation, and a fleet of horde ships arrives. They are mostly destroyed and the news of a war starts. It seems the humans have been used in the past to make cyborgs to fight for one side.

This is part of a three book series, and dang if I cannot find the title to reread them.

A Learning Experience By Christopher Nuttal 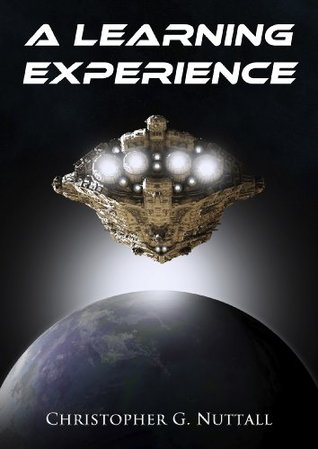 Earth is not alone. There is a towering civilisation out in the galaxy, far greater than anything we can imagine. But we are isolated from the galaxy ... until now.

When a bunch of interstellar scavengers approach Earth, intending to abduct a few dozen humans and sell them into slavery in the darkest, they make the mistake of picking on Steve Stuart and his friends, ex-military veterans all. Unprepared for humans who can actually fight, unaware of the true capabilities of their stolen starships, the scavengers rapidly lose control of the ship – and their lives.

To Steve, the captured starship represents a great opportunity, one to establish a new civilisation away from Earth and its increasingly oppressive bureaucracy. But with the aliens plotting their revenge and human factions suspicious of the new technology, it will be far from easy to create a whole new world ...

15
I am looking for a sci-fi novel about an earth expedition invading an alien planet by mistake
6
Book about a group of escaped prisoners with tattooed faces
14
Science fiction book with low-tech humans eating other sentient species
5
Book about humans as mercenaries for an alien. NOT Nuttall book
8
Identify this book about an alien performance artist
11
Searching after a science fiction book/series about Galactic war with a weaker Human/Alien Alliance vs. Another hostile alien race