Which actor appears as the most different species in Star Trek?

Highly related: Which actor has portrayed the most distinct roles in the Star Trek universe?

The reason I ask this, and the reason it's not a dupe is because if we look at the answer to that question, we have, for example:

In addition, note that the same character appearing as multiple species is in bounds for this question but not the other one.

Which actor appeared on Star Trek as the most different species?

Now all the disambiguations. This is going to seem tedious, but otherwise we end up with a hundred comments/questions/debates. 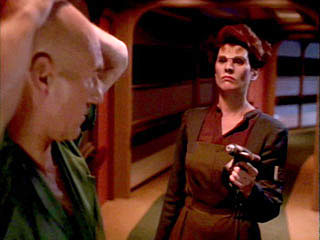 Credit where credit's due, Praxis' answer on Is this Beverly Crusher? gives Patricia Tallman, with ten:

I didn't include DS9 5x17 "A Simple Investigation", because while she was a stunt double for an alien character (an Idanian), she was presumed human in the scenes the stunt double was used. There were also a number of other stunt-double appearances, but the races are duplicated above.

I'm going to assume it was Jeffery Combs.

6 Species, plus a holosuite program (whatever they are).

Depending on how you define role, Tim Russ may be a contender with at least seven that I can think of which were all speaking roles:

He's also played a couple different imagined/illusionary versions of Tuvok but I don't think they'd count as a separate species.

seems to indicate that Patricia Tallman appears as at least five species. (I'm not sure which of those images are humans or not -- someone can do the research and clarify if they wish.)

Now if you’re going to be picky and say that the actor had to be credited and that there’s documentation proving the actor played such and such an alien, then you’re answer is going to be Jeffrey Combs. But if you want to know who REALLY played the most species, then it’s Bill Blackburn. You can find a small blurb about him on his IMDB bio:

Was an uncredited extra in most episodes of the original "Star Trek". Frequently played Lt Hadley, seen on the bridge, or walking around the halls of the Enterprise, but he could and did turn up in any other available extra role, sometimes in costumes which fully obscured his face. He also did minor stunts on the show. All his parts were non-speaking.

You get even more detail when you watch the cast interviews on the Re-mastered release of ST-TOS.

Billy played Lt. Hadley, the ‘guy who sat next to Sulu’ before Chekov joined the crew. He never had a speaking roll but they say he was an uncredited extra in most every episode of ST-TOS. Moreover, whenever they had need for an alien (i.e. guy in a monkey suit), they would get Billy to wear the costume.

He played so many different aliens that he can’t even remember them all. The cast all acknowledged what a great asset he was to the show, but back then people didn’t pay much attention to giving credit to anyone but the stars. His efforts weren’t credited, never documented but very much appreciated.

I believe the correct answer to this question is Jeffery Combs.

The following roles are attributed to Mr. Combs:

Not the answer you're looking for? Browse other questions tagged star-trek-tng aliens actors star-trek or ask your own question.

22
Did any Star Trek actor play both a Starfleet crewmember and one of the encountered aliens?
51
Which actor has portrayed the most distinct roles in the Star Trek universe?
91
Is this Beverly Crusher?
10
Is this Patricia Tallman in the TNG episode "Half a life"?

24
How does cross-species (Klingon/Human, Vulcan/Human) breeding work genetically in Star Trek?
13
Actor with the most comic-book movie roles?
1
What actor has portrayed the most comic book/science fiction superhero characters with some sort of special abilty and/or capabilities?
30
Which character in Star Trek has been played by the most actors?
5
What is the most populous race in the Alpha and Beta quadrants?
5
What TV show has had the most actors appear on any of the Star Trek movies and/or TV series?
8
Which Star Trek species are not uniform?
5
Which Star Trek species has had the longest real-world gap between canon references?