Has anyone revealed why the word "zombie" is used in the comics, but not on the show(s)?

In The Walking Dead comics, the word "zombie" wasn't used at first, but fairly early in the series, it was introduced. Rick initially thought it was too silly to mention, but eventually accepted that it was an apt description of the undead.

I vaguely recall reading a comment on this issue from the franchise's creator, Robert Kirkman. Basically, he said that at first, he didn't want to use the term, but he kept writing "zombie" inadvertently and having to edit it out of every issue. Afraid that he would eventually miss a "zombie" somewhere in the editing process, he finally decided to get it over with so any accidental uses of the word wouldn't be problematic. Still, the word is very rarely used in the comics, despite the fact that the characters have acknowledged that the walkers are also zombies.

On the show(s), however, the word zombie has never been uttered, and presumably never will. I understand the rationale behind this decision: the audience knows what zombies are, but the characters shouldn't, because it helps to intensify the sense that something truly unforeseen, unprecedented, and inexplicable is happening, and the characters have no idea how to handle it (at least at first). Therefore, the TWD television universe is one where zombie movies, games, books, etc, don't exist.

I'm not asking why the word zombie isn't being used on the shows - I'm asking what made Kirkman and the producers decide to change tactics relative to the comic books.

Why did Kirkman and the other producers choose to make the television shows follow slightly different rules than the comics?

I imagine this is probably an instance of what TV Tropes calls "Not Using the Z Word."

Basically, the idea of zombies is ridiculous and zombie movies tend to be cheesy. When you even mention the word "zombie" in zombie movies, people tend to chuckle more than scream. As a result, many zombie (or alien, or vampire) movies will avoid using the word at all (see: 28 Days Later and the Resident Evil movies)

Here's the Kirkman quote you allude to:

One of the things about this world is that people don't know how to shoot people in the head at first, and they're not familiar with zombies, per se," Kirkman said on Talking Dead. "This isn't a world the (George) Romero movies exist, for instance … because we don't want to portray it that way, we felt like having them be saying 'zombie' all the time would harken back to all of the zombie films which we, in the real world, know about.

So there's your answer. Saying "zombie" would have made the audience think about things like the Romero zombie movies, not Kirkman's oh-so-serious AMC television drama.

The Walking Dead Wikia claims that "zombie" is hardly used in the universe, including the comic.

While the term "zombie" does exist within The Walking Dead universe, it is seldom used.

Why? Zombies weren't scary anymore, they'd become silly and campy. They're slow. They're stupid. They say "braaaaains". You can get away from them with a brisk walk. They're not a threat. They exist to be taunted and mowed down by creative weaponry.

Some examples of silly zombies...

If they called them "zombies" the reader would be constantly reminded of all this cultural baggage in what is supposed to be a very serious work. On the other side, the Venture Bros exploits this by referring to vampires as "Draculas".

The characters in the comic even point this out...

In the comic book, when Rick's group discover the prison, both Rick and Tyreese discuss how it still sounds funny to use the word "zombie."

After some research, I discovered that it seems like the conversation mentioned here doesn't actually exist. The two most prominent uses of the word "zombie" in the comics are: 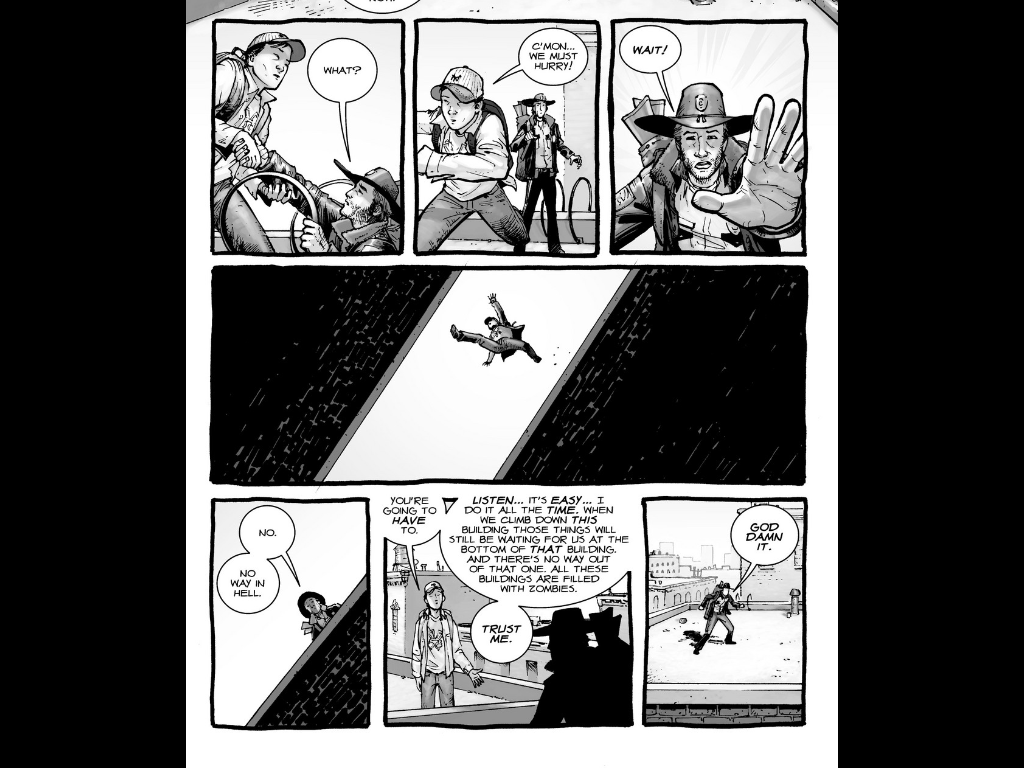 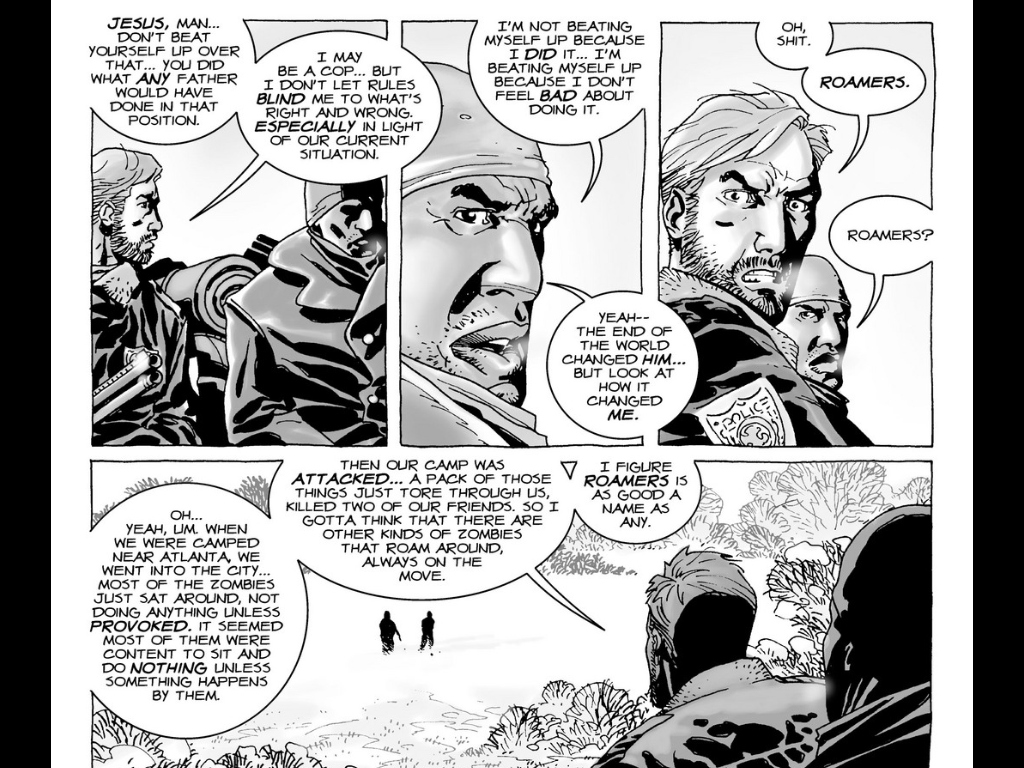 In 2002, 28 Days Later made zombies scary again. The Dawn Of The Dead remake in 2004 cemented the trend. The Walking Dead comic was published in 2003 just as this was happening, and likely conceived and written before. Even after this reboot, zombies are still considered campy.

As for the in-universe reason, the George Romero zombie movies (and presumably other popular zombie movies) did not exist in the Walking Dead universe. So the term "zombie" is not in popular culture, nor are their tropes like shooting them in the head. This is a common trope to avoid having genre savvy characters ruin the tension.

"Zombie" has been used once in the TV series; when interviewed, Lauren Cohan stated that Romero movie zombies never existed in the popular fiction of the TV Walking Dead universe. The characters within The Walking Dead TV series and comic books come up with their own monikers and categorizations for the undead.

The original source is a Chicago ComicCon 2012 panel.

3
Why didn’t the zombie outbreak in The Walking Dead start earlier?
11
Why doesn't anyone use shuriken for weapons in the Walking Dead?
4
Has George Romero ever revealed where he got the idea for his zombies?
3
Has Max Brooks ever discussed the possibility of writing more zombie books?
9
Is the zombie-to-human ratio ever mentioned in-universe in The Walking Dead?
24
Why not escape the walkers on an island?
5
Why were the soldiers using a .50 caliber anti-matériel rifle to kill a single zombie?
3
Why is Madison not infected in Fear the Walking Dead?
4
Has the term "bosonics" ever been used explicitly in a story or film?