Series of books with intergalactic travel/trade

I've read only one of the books in the '90s (I think it was the second). There is a ship whose's captain is a "lioness": she is from a race of anthropomorphic felines, whit a social structure very similar to heart's lions. The males are the heads of the families but the females do all the work. Patriarchs live with the fear, especially when they get older, to be deposed by their elder (or stronger) child.

The only things I remember are this alien race, that the ship was a trading ship and that it was a series. The protagonist is a human but the captain of the ship has an important role and I think she has a part in the entire series.

This sounds like The Chanur Saga by C.J. Cherryh: 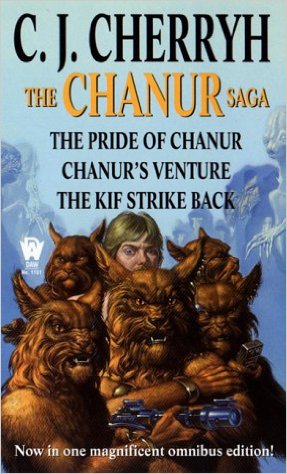 Hani are a feline-like species, maned, bearded, usually of red or tawny fur. Females are smaller than humans, males much larger (for much the same reason as Earth lions)....

They live in autonomous clans, each consisting of related females, children, and a single male, the clan lord. A male takes over a clan by defeating the previous lord in personal combat. Most males are not that lucky. Male offspring are thrown out of their clan when they become strong enough to pose a threat to the lord. They live in exile among others like themselves, honing their fighting skills and waiting for the opportunity to challenge for a clan. For this reason and because males are stereotyped as being emotionally unstable, only females go into space (until Pyanfar Chanur changes the rules). Females do all the work on clan lands and in space ventures, although Cherryh does describe some able and intelligent males who become involved in the world around them.

There are actually five books in the series, although only three are in the "Omnibus Edition." The Pride of Chanur is a trading ship, and the first novel deals with the disruption caused when Pyanfar Chanur grants sanctuary to a Human fleeing from another species, the Kif.

The second book dealt with continued repercussions, and I suspect the whole series did... I never finished the series in part because it wasn't my personal cup of tea - again, to quote Wikipedia:

the Chanur novels are unusually realistic examples of space opera, with ship-to-ship shooting minimized in favor of coercion, manipulation, politics, pride contests, and clashing economic interests, driven in many cases by species-to-species miscommunication and misunderstanding.