In the military, his powers manifest and there are episodes where he carries cannons, leaps into battle against the enemy with speed and super strength, and is brought to the notice of commanding generals who seek to utilize him to their advantage.

This might be Gladiator by Philip Wylie. Hugo Danner has extreme endurance, speed, and strength, and he did participate in World War I where he's noted as having lifted howitzers (mobile field cannons) on his own. He's also acknowledged as the inspiration for Superman. 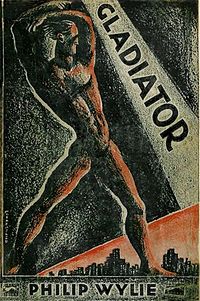 Where it doesn't match is that he had his abilities from a young age, having been experimented upon by his father before birth. It's an older book, published in 1930, so Project Gutenberg has a copy that you can check.

5
Book about a boy (man?) who was genetically modified by his father

3
Searching for title of fantasy novel including harpies
11
Help find name and author of science fiction story about robots taking over all aspects of war
11
Childrens fantasy, blind monk leading boy who can control the elements
4
EBook (maybe first in a series) where people gain superpowers after an alien falls to Earth, protagonist is a single mother
5
LitRPG book with the main character “trapped” in VR MMO world, manages to re-invent tobacco as a crafting recipe, serves a “dark” god