I want to find the name of a book I read many years ago. The story is set in Britain. The weather is controlled by magic. I read it in the 60's or early 70's

This could be the 1968 novel The Weathermonger by Peter Dickinson. 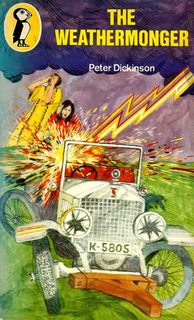 It is set in Britain, and one of the two main characters — Geoffrey — has magical abilities that allow him to create and control the weather.

From the author's own web site:

In a Britain returned to a medieval way of life following the "Changes", which turned people against machines and electricity, Geoffrey, the local Weathermonger (chosen for his ability to summon rain when the farmers need it) and his sister are about to be drowned as "witches" for breaking the rules and maintaining an outboard engine. Following a thrilling escape to France (which has been unaffected by the Changes which have gripped Britain), Geoffrey and Sally return on a mission to discover the source of The Changes.

13
Identify book: controlling the weather as a weapon in silent global war
10
A fantasy book where a young shepherd girl who comes back to her village to find everyone dead by plague
14
Looking for story where weather control makes snow fall once in warm climate
8
Story about a boy who could control the weather and droughts
7
Novel set in Roman ruled Britain
7
Olympian Gods in Modern Times
4
Does anyone remember this book about a mountain of asphalt?
11
Short story about sentient weather
8
Fantasy book with dance magic, had an Arabic/Oriental culture feel
6
Book: Nanobot apocalypse on Earth, originally used for weather control