I'm trying to find the name of a sci fi book I read in 1993 about a huge space ship buried under a mountain. It is found one day and the authorities excavate a cave and try to break in but cannot. The cave eventually becomes a tourist attraction and one day a group of visitors somehow do something that opens a portal into the ship, they enter and become trapped inside.

They notice displays of symbols and work out it is a countdown and they have hours or a few days before it tries to take off. They then have to try and find an exit through the huge expanse of the ship. While doing that they learn more and more about the advanced technology and the giant like aliens who built the ship as they navigate their way through the strange vessel.

I'm guessing "The Asgard Run" by Steve Vance. It is somewhat after your timeframe but the details seem to fit. (Synopsis from "Goodreads)

Roger Griffin's lifetime dream lay before him. He stood within an immense interstellar vessel that had lain beneath the Wyoming mountains for millennia. It had remained a virtually impenetrable fortress to the scientific teams that prowled its two-mile-long exterior-until they managed to pry open the door. Then the dream of scientific discovery became a horrific nightmare as an earthquake awakened the long dormant brain of the malfunctioning spacecraft-and rocked the door shut. Griffin and his fellow survivors frantically tried to escape, but the ship's computer took steps to rescue itself and exterminate the humans in board.

Suddenly, the newly awakened control room displayed a clock for its terrified inhabitants to see. Its lights blinked in and off, but the message was clear: Six hours until lift-off. Six hours to live. Six hours to die. 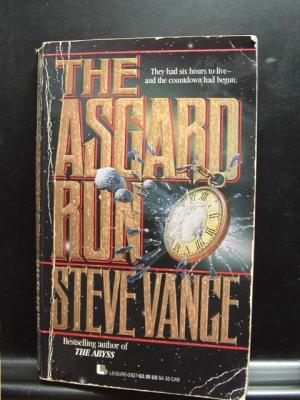