Does Rogue ever take advantage of the removable power suppression we see?

One of the main characteristics of Rogue is her lack of control of her mutant power - unless she wears a full-body suit and gloves, she can't touch anyone without hurting them. With even brief physical contact, she begins to drain a person, absorbing some of their essence (personality, memories, etc). With mutants (and other superpowered beings) this extends to their powers. The longer she holds on, the longer the effect lasts.

We've seen a few characters or situations where Rogue has had her powers turned off. Notably, there was a time when she was strongly considering a 'mutant cure' that would permanently remove them, but which ended up being a front for Apocalypse. These moments have usually been used for drama - will Rogue be selfish and choose to abandon her superheroism, or will duty overrule and force her to self-sacrafice?

That changed with Genosha - on Genosha, they utilized collars which suppressed the abilities of mutants. These collars could not be removed, were packed with high explosive, and a slavemaster could turn on or off the suppressing ability with the push of a button.

This technology was mass-produced - dozens of mutants 'worked' on Genosha. It seems very unusual to me that Rogue would fail to see the utility of such a thing. She obviously wasn't a fan of the whole 'slavery' thing, or the 'packed with C4' thing, but surely one of the many engineers she knows (Forge, Beast, and even Xavier) could have taken out the C4, removed the lock, given her a button to turn it off/on, and turned a bulky slave collar into a necklace or armband.

This was my first though years ago when I was a kid watching the X-Men animated series on Fox, and I freely admit that the show changed details of the comic stories it presented when it had to. I also haven't kept up with the comics since the 90s.

So has Rogue ever (in any media) made use of the available power suppression technologies voluntarily?

...surely one of the many engineers she knows (Forge, Beast, and even Xavier) could have taken out the C4, removed the lock, given her a button to turn it off/on, and turned a bulky slave collar into a necklace or armband.

Well... That's essentially what happened in Mr. and Mrs. X. She's using an inhibitor collar (one that can be removed and doesn't have explosives) and then she's given a bracelet version by Beast (in #6): 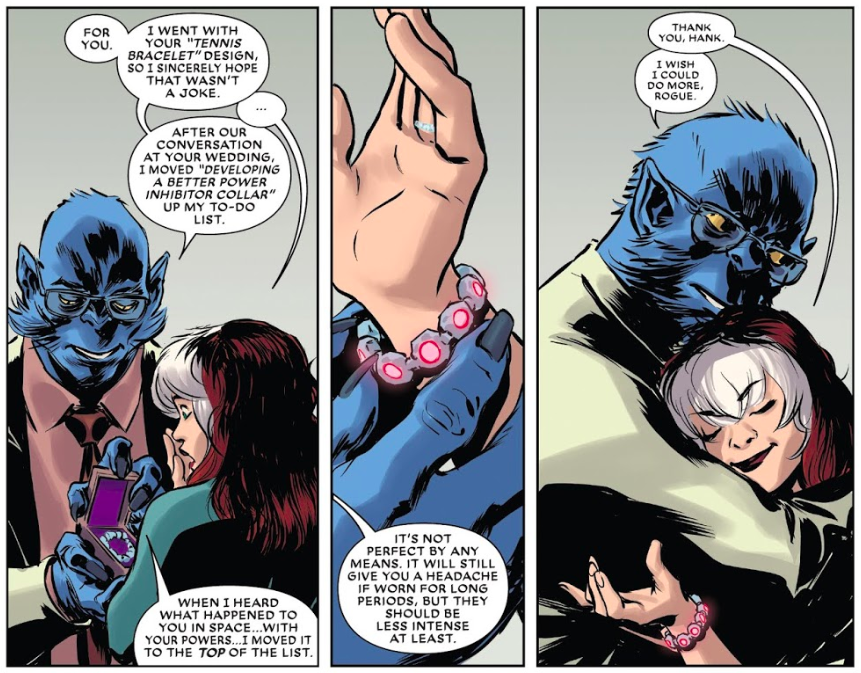 Not the answer you're looking for? Browse other questions tagged marvel x-men powers rogue or ask your own question.

7
What does Storm really bring to the table?
15
Is Rogue's power absorption ability limited to just the skin on her hands?
13
What is the true extent of Rogue's power?
6
Can Rogue absorb and utilize powers from multiple mutants simultaneously?
3
Can other people touch Rogue?