How much of a man was Darth Vader? 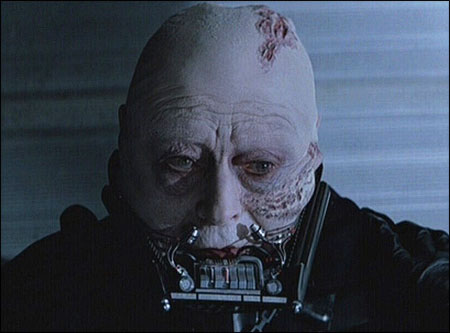 Of Anakin Skywalker, Obi-Wan's Force Ghost had the following to offer:

Obi-Wan may have been remarking upon Vader's lost humanity more than anything else, but it got me thinking about Vader's physical being anyway. Exactly how much machine and how much man are we talking about?

We get some idea from the surgery scene in Revenge of the Sith:

But things may have changed for Vader in the years between Revenge of the Sith and Return of the Jedi, such as organs failing and needing to be replaced, as well as improvements to his technological components.

At the time that Obi-Wan made his comment (which was in Return of the Jedi ), what was the ratio of man to machine in Vader?

Well-reasoned estimates are welcome. Ratio by volume is preferable, but weight is fine too, so long as this is made clear in the answer.

We can calculate, roughly, how much of his body was replaced by machine.

Right arm, above the elbow, cut off by Dooku:

Left arm, above the elbow, cut off by Obi-Wan:

Both legs, above the knees, cut off by Obi-Wan:

Data on relative volumes of limbs is hard to come by, but I'll assume that all body parts are roughly the same density and use this data for body part weight percentages. Let's assume he lost ~75% of each of those limbs (he may have lost more during the surgery, but it's clear that Star Wars medical technology is more advanced than ours), so a conservative estimate for the amount of his body that was replaced by machine is:

(This screenshot is while the Emperor is shocking him at the conclusion of Return of the Jedi.) It's supported by his difficulties breathing and speaking without his suit. If this is true, it could maybe put him to about 35 or 40%, but even with that I'm not confident he's "more machine than man" in a literal sense.

It was said that, due to the extent of his injuries, he was 80% machine (prosthetics), and a mere 20% human. His legs were severed at both knees, his right arm at the elbow, and the left at nearly the shoulder. His torso is completely human. The graphic novel, 'Darth Vader and the Lost Command' states so explicitly in one of its pictures. Wikipedia also provides this information.

75
When Jedi lose parts of their body, does their midi-chlorian count and strength in the Force diminish?

70
Why did Obi-Wan leave Vader on Mustafar?
32
What is the origin of Darth Vader's face scar?
87
Why couldn't the Jedi detect Senator Palpatine as having powers?
62
The use of 'Darth' as Vader's name, not title, in Star Wars
52
What happened between Revenge of the Sith and A New Hope that made Vader believe he was more powerful than Kenobi?
44
Who/what exactly does Darth Vader believe taught Luke between the events of “The Empire Strikes Back” and “Return of the Jedi?”
23
Why didn't Darth Vader tell Sidious that Obi-Wan disappeared instead of dying?
70
Was Luke in “Return of the Jedi” really “better” than Obi Wan in “Revenge of the Sith?”