Girl-Genius - who is Agatha's brother

Gil is the brother (link taken from wikia) of Zeetha, given the explicit warnings provided by Klaus about someone who looks like Zeetha coming to kill him, the Skifandrian knowledge that Klaus has for staying awake (link), and that Skifandrians hate twins.

In the introduction to "Agatha H. and the Airship City",

Barry heterodyne thinks to himself about the loss of the "Son" of Bill.

Agatha is the daughter of Bill and Lucretia

Who is her brother? Has that been "revealed" yet?

The only publicly known child of Bill and Lucrezia (before Agatha's story takes place) was Klaus Barry Heterodyne.

According to the old seneschal Carson, he died the night the Other attacked Castle Heterodyne, crushed by falling rubble as Carson's son tried to get him out of the castle. 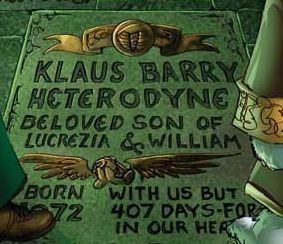 Although the events of that night have many questions about them, there's little room for doubt as to his existence and death. Spoilers ahoy:

Since what happened that night is a subject of extreme debate - Lucrezia was assumed kidnapped at the time, and that is now widely thought to be not true and that she in fact may have caused the events of that night - you can make arguments for just about anything happening. It's pretty clear Carson believes what he saw however, considering his own son was lost, and Bill Heterodyne himself went nearly nuts with the loss of both his wife and son.

Not the answer you're looking for? Browse other questions tagged characters girl-genius or ask your own question.

5
When the Jägers discover Agatha in Girl Genius, to whom is Jenka reporting?
3
How does the Girl-Genius web-comic relate to the Agatha H. books?
3
Was the child textbook human or construct/superhuman in girl-genius
2
What did Lucretia need rescued from (Girl Genius)
6
In Girl Genius, is it possible to slaver-wasp a Jägermonster?
4
Is the Dark O(ne) worshiped in Girl Genius?
1
Who or what were Primus and Unicron?
1
What differentiates a “Spark” from a “Scientist” in girl-genius
2
In “Girl Genius” novel “Agatha H. and the Clockwork Princess”, do the Van Rijn Muses contain human consciousnesses?