Green Lantern story with a Lantern who only has 60 seconds left on the ring...and no way to recharge it

I am looking for a Green Lantern story from the Bronze Age of comics to the early Modern Age (circa 1975 to 2000); a wide swath I know, but this particular story had an unusual Green Lantern.

This was the most efficient use of the Power Ring I have ever seen and wanted to know if anyone had a line on the title of the story, a picture of the character or even a name I could use to do the rest of the background. 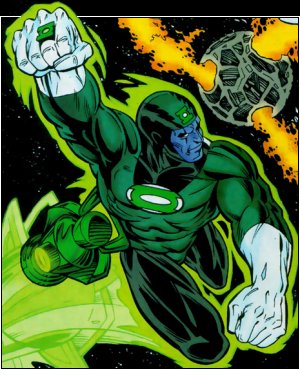 You might be referring to a post-Emerald Twilight storyline involving Raker Qarrigat:

One of the lone sources of light on Darkseid’s horrifying homeworld, Qarrigat lead a few unsuccessful rebellions against the tyrant. He’s kind of a Sisyphusian character, pushing against a force that will never move, but he’s got a rest for a while now that the Fourth World is MIA....

The very idea of the Green Lantern of Apokolips is the kind of shared universe crossover that only really happens in super-hero comics, and thanks to creator Walt Simonson, it’s one of the best. Even better is the idea that, thanks to “Emerald Twilight,” Raker had to seal his ring in a time bubble, relying on it only in case of emergencies lest his final 24 hour charge run out and leave him powerless to battle Jack Kirby’s ultimate evil!